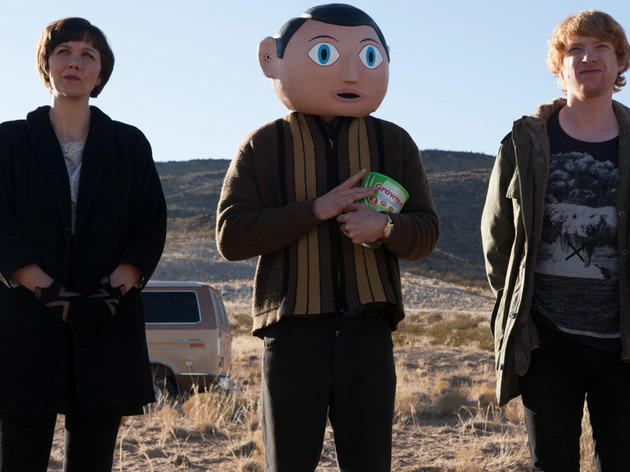 Dazzlingly strange art rock pours out of 'Frank', both the movie, a dark comedy from the Irish director Lenny Abrahamson ('What Richard Did', 'Garage'), and the title character, a singer devoted to lyrics about random tufts of string and terrifying litanies that might have freaked out Joy Division's Ian Curtis. Granted, these noises must penetrate a thick, muffling wall of papier-mâché: Frank always wears an unblinking false head onstage (as did the film's real-life inspiration Chris Sievey, a British comic and musician who died an enigma in 2010).

From behind the mask's blue eyes comes the menacing purr of Michael Fassbender, yet this is the project that should have been called 'Shame': co-writers Jon Ronson ('The Men Who Stare at Goats') and Peter Straughan ('Tinker Tailor Soldier Spy') turn the frontman's prop into a potent symbol of artistic freedom and painful social dysfunction alike. Even in the van or shower, the man's seriously scary.

Frank and his surly band, the unpronounceable Soronprfbs – dominated by a vicious theremin artist played by Maggie Gyllenhaal – are bickering their way through an unsuccessful UK tour when we first meet them via Jon (Domhnall Gleeson), a spectacularly untalented dork who's somehow recruited to the lineup. Arguments persist whether Frank called the new guy 'cherishable' or 'perishable', but Jon is in – and, it must be said, director Abrahamson is on his side, giving us a twinkly, quirky score and Jon's near-obnoxious onscreen tweets. (One dreams of what David Lynch would have made of this material.)

But 'Frank' is too loaded with provocative ideas to give in to mere indiedom. As the group settles into its months-long recording session at a wooded retreat, Abrahamson lays bare the cult of personality through multiple 'Amadeus'-worthy creative clashes, some of them howlingly funny. Because of the way the plot is structured, a blow-out is unavoidable, and it occurs at the South by Southwest festival in Austin, Texas (weirdly graduated into a film's pivot point), where Jon's eagerness to sell out in front of cute, slack-mouthed publicists and Frank's paralysing awkwardness both lead to disaster.

A lot of this is painfully insidery: 'Frank' plays to the audience that would mock an oily superfan who makes a fawning scene in a diner, when, in fact, that guy is the ideal viewer. But what a rebound – you know the head's coming off and Fassbender delivers moments of heartbreaking fragility that bring to mind the cult music documentary 'The Devil and Daniel Johnston'. If you'll pardon the cleverness, 'Frank' takes time to wrap your own cranium around, faults and all, and that's a wonderful thing.