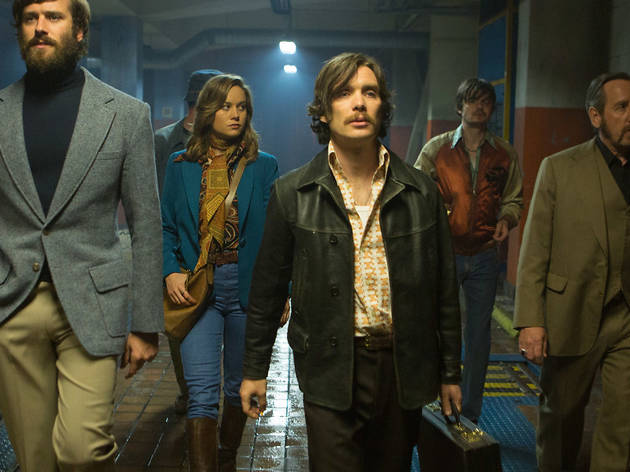 A prodigiously talented cast is drowned out by a cacophony of gunshots in ‘High-Rise’ director Ben Wheatley’s entertainingly absurd riff on a ‘Reservoir Dogs’-style crooks ’n’ quips caper. It's the kind of guns-blazing free-for-all that might be described as a 'bullet ballet'. But this is more like bullet fringe theatre: a bold, stagey, intentionally repetitive and borderline experimental attempt to strip the crime flick down to its absolute bare essentials: criminals, cursing, double-crosses and lots and lots (and lots and lots) of shooting.

Set in Boston in 1978 (but shot, weirdly, in Brighton), the opening half-hour is a riot of cool tunes, hot threads, big hair and vintage motors, as IRA operative Chris (Cillian Murphy) cruises along to an arms deal hosted by brokers Justine (Brie Larson) and Ord (Armie Hammer). The seller is Vernon (Sharlto Copley), a touchy South African with a van full of Beretta machine guns. As the parties convene at a remote dockland warehouse, it turns out that they’ve each brought along at least three friends – the cast expands to include Michael Smiley, Sam Riley, Noah Taylor and Jack Reynor (channelling Seth Rogen as a bearded stoner). But when it turns out two of these jokers have an existing beef, everything goes to hell very quickly. And stays there.

The last hour of ‘Free Fire’ is one long, noisy and increasingly bonkers shootout, as treachery is uncovered and allegiances shift, and the characters get picked off one by one. Wheatley stays close to his actors, hurling us neck-deep into the mayhem until it becomes hard to know exactly what’s going on – who’s alive, who’s dead and who’s bleeding noisily on the concrete.

It doesn’t entirely hold together; the relentless din and repetition flips from thrilling to exhausting and back again more than once. But in those moments when everything clicks – when Copley’s nasal bitching ricochets off Smiley’s grizzled obscenities and slams into Larson’s perfect poise – this is absolutely joyous.