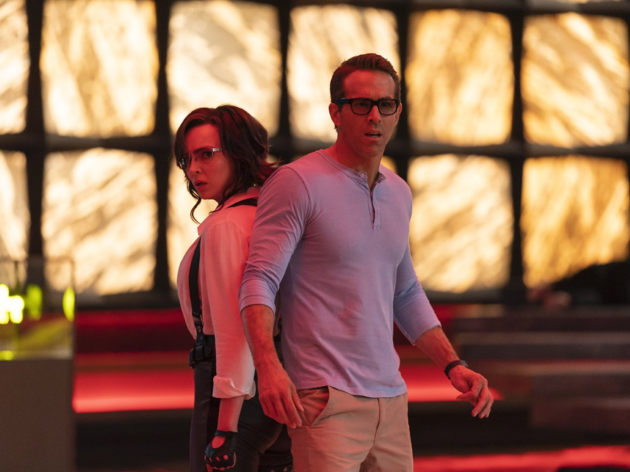 There are signature roles, and then there’s the kind of symbiosis that seems to have taken place between Ryan Reynolds and Wade W Wilson, aka Deadpool. Reynolds seemed to have absorbed the same sardonic self-mockery, the same meta-textual habit of winking to the audience, the same faux-innocent embrace of the absurd. At first, in Free Guy, he seems to be treading the same turf again – which is why it’s such a relief when this film finally gives him new notes to play.

The film’s setting is a Grand Theft Auto-alike video game city where cheery, innocent clerk Guy (Reynolds) lives the same day over and over again. The only difference is which player-character robs the bank where he and his best friend Buddy (Get Out’s Lil Rel Howery) work. But when he sees the player Molotov Girl (Jodie Comer), he breaks out of his role and sets out to improve himself for love.

In reality Molotov Girl is Millie, a game designer who suspects that video-game giant ‘Soonami’, a company as obnoxious as its spelling and run by Taika Waititi’s Antwan, has stolen her code to build Guy’s city. She and Guy turn the game upside down – one looking for answers, the other for love – in an increasingly absurd commentary on the commercial, sometimes crass nature of gaming. There’s an occasional meta detour to examine the fate of ‘non player characters’, or NPCs, who are so thoughtlessly blown away in pursuit of extra points each day.

In the sun-drenched, deliberately flat-feeling Free City, there’s a sense of openness that’s notably absent from Millie’s real world, and Guy’s innocent exploration of his new options opens her eyes to unseen possibilities. It’s that sincerity that ensures Guy is not just another Deadpool clone, which is welcome if not quite enough on its own.

The result is overlong and rarely groundbreaking – there are hints of The Truman Show, Edge of Tomorrow and, visually, Inception – and suffers from some obnoxious filmmaking shorthand in its portrayal of other cultures late on. There’s also some cute fan service that swerves quickly into obnoxious corporate tie-in.

Still, Guy has just enough heart to keep him the right side of glibly annoying and Reynolds’ charm never quite wears off. Maybe Free Guy is conclusive proof that the best way to make a video-game movie is just to avoid basing it on an actual game.