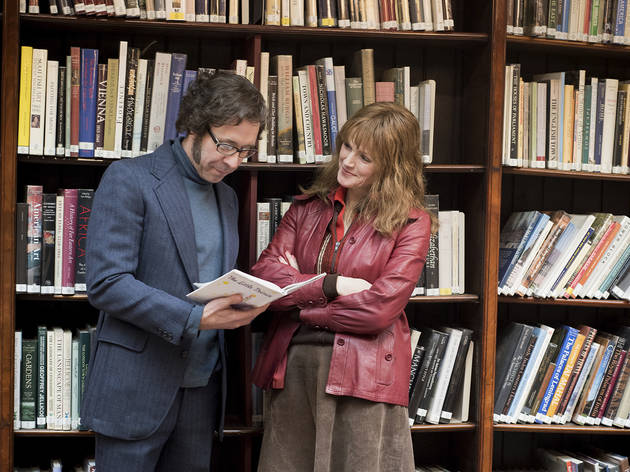 Maxine Peake grabs this '70s-set comedy by the scruff of the neck as a stand-up who takes no prisoners.

‘It’s not a job for a woman,’ warns comic Lenny (Alun Armstrong) when he’s approached by Maxine Peake’s aspiring stand-up for a spot on the working men’s club circuit – but that only makes her more determined. That Peake’s character is known only as ‘Funny Cow’ is just one of this film’s many quirks, and her performance is one of its chief pleasures. She’s a brassy, belligerent, working-class woman who rises from every knockdown with a glint in her eye. While Peake has built a rep in supporting roles, from ‘Shameless’ to ‘Dinnerladies’, here she’s in the spotlight and not about to leave it.

While the film is inspired by various female comedians, it’s very much a fictional biopic. Funny Cow looks back on her rocky road to a level of fame that isn’t ever spelt out – this is more about her past. A childhood in a Yorkshire town is poverty-stricken and tough, with the young Funny Cow played by Macy Shackleton and, later, Hebe Beardsall. But it’s when Funny Cow grows up and becomes Peake that the film really gets into its stride, portraying her complex relationships with both the volatile Bob (Tony Pitts) and smitten, pretentious librarian Angus (Paddy Considine, who’s a hoot playing against type). The culture clash between Funny Cow and Angus provides the funniest moments, though her heckler put-downs are also a treat. ‘I’m getting fifty quid to make a twat of meself,’ she barks at one shouter. ‘What you getting?’ Lenny shows the darker side of the comedy scene, offering poignant moments as the downtrodden stand-up whose years of enduring onstage abuse have taken their toll.

Modern audiences might squirm at some racial and sexual material from the comics. Funny Cow is also guilty of these cheap gags, which might shake your sympathies, but Peake pulls off the highwire act with likeability. More flawed is Tony Pitts’s ambitious script, which crams in a bit too much on every level, from plot to characters. And Funny Cow’s family members are dropped into the story at different stages of their lives, getting only a basic sketching. But while it may not be a deeply satisfying story, it is a terrific showcase for Peake’s talents, and an entertaining one at that.

Director:
Adrian Shergold
Screenwriter:
Tony Pitts
Cast:
Maxine Peake
Paddy Considine
You may also like
Popular movies
We know this city. Do you?