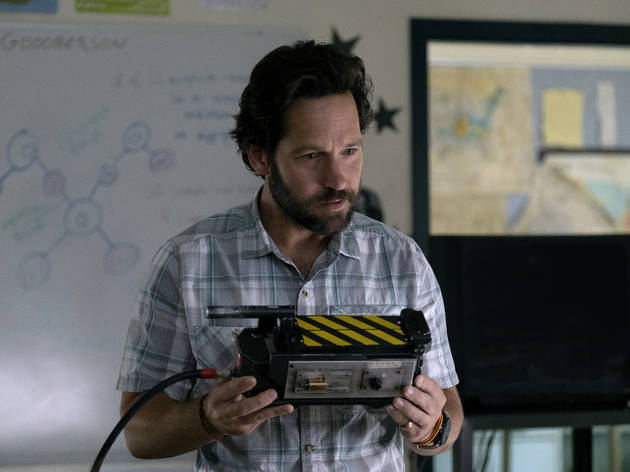 Full of surprises and completely unsurprising, this spirit-lifting return hits all the old notes

A movie that knows exactly what its audience wants and dishes it out in big ectoplasmic dollops, Ghostbusters: Afterlife manages to be full of surprises and completely unsurprising all at once. A feast of callbacks bolted onto a serviceable, if familiar, plot, it’s delivered by co-writer-director Jason Reitman – son of Ghostbusters and Ghostbusters II shot-caller Ivan – with enough heart to elevate it above your average franchise reboot.

No doubt to the dismay of the trolls who harassed Leslie Jones and co in the wake of Paul Feig’s gender-swapping 2016 Ghostbusters, Afterlife also beats to the pulse of a female protagonist. The impressive Mckenna Grace is nebbish tween science buff Phoebe, a New Yorker dragged to a dusty, eerie corner of Oklahoma with her brother Trevor (Finn Wolfhard, amping up the obvious Stranger Things vibes) by her struggling single mum (Carrie Coon).

Their creaky new home has been left to them by Phoebe’s mysterious and recently deceased grandpa, whose actual identity is too obvious to count as a twist. Finding kinship with her jaded ex-seismologist teacher (Paul Rudd), Phoebe stumbles upon a whole realm of spectral activity emanating from an out-of-town mountain, while Trevor discovers Ecto-1 in the barn. Cue… well, everything you love about this ever-loveable franchise.

Rudd is a smart addition to this world, offering the loose charm of Dan Aykroyd and the wry detachment of Bill Murray, but he’s mainly a fun sideline in a plot that zeroes in on family dynamics. There’s something obviously personal in this Reitman-to-Reitman torch-passing, and it combines with the rural setting to spark faint but fond memories of early Spielberg classics.

There’s a lot of CGI, of course, but also a nicely analogue feel where it matters: demonic critters are partly rendered with old-school SFX, while haunted house edifices daubed in doomy Bible quotes preserve that end-of-days Ghostbusters feel.

It all clocks in at 20 minutes longer than the original, which translates into a saggy first hour enlivened by Logan Kim’s scene-stealing 12-year-old podcaster. Happily, the second half is snappier. And if the conveyor belt of nods to Ghostbusters lore are mainly crowbarred rather than elegantly stitched into the story, it’s a pretty minor grumble. A Twinkie is a Twinkie, right?