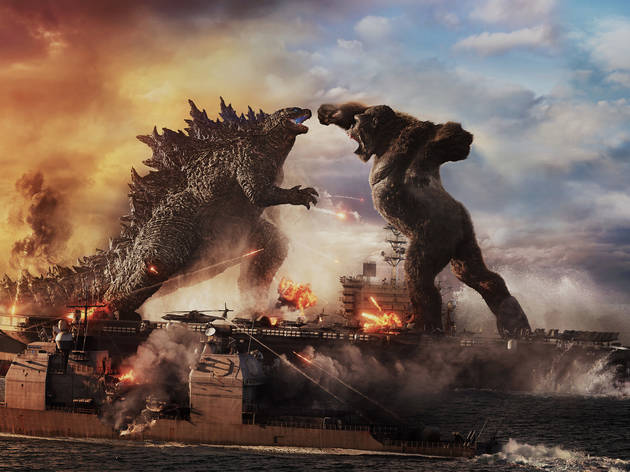 This is it. Legendary’s MonsterVerse has been building up to this moment since ​Hollywood re-unleashed Godzilla in 2014, care of Monsters director Gareth Edwards’s ​often awe-inspiring update. Th​is time the​ overgrown lizard is in one corner, King Kong is in the other, and humanity is cowering somewhere in the middle. The status of alpha kaiju awaits the winner.

It’​s​ worth noting, upfront, that Godzilla vs. Kong is​ ​the definition of a review-proof film. If you want to see these once-puppet and stop-motion legends, now rendered in CG and ​locked in cacophonous mortal combat, well, horror director Adam Wingard’s blockbuster is that movie. Undoubtedly the loudest ​release of 2021 so far, it’s a wild ride of OTT destruction. ​From t​earing a​ ​neon-hued Hong Kong​ a new one,​ to​ tossing​ a navy flotilla aside like toys at the sharp end of a toddler tantrum, Wingard’s scaly-furry face-off is often outrageously dumb fun.

And the plot? Well, none but the most devoted fans are here for the ludicrous narrative involving an undiscovered world at the centre of the earth. Nor are they expecting Oscar-winning performances from the largely expendable cast of humans. Stranger Things’ Millie Bobby Brown, carrying on from the previous Godzilla sequel, is a welcome presence, but she has little to do beyond wondering why the kaiju has taken to smashing up a suspicious-looking big corporation. A game Rebecca Hall tries to insert some heart and seriousness into her pseudo-scientific exposition dumps. But the MVP is Alexander Skarsgård, who manages to spend the entire film looking bemused at being there at all.

The monster-movie clichés come thick and fast, too. If your Godzilla vs. Kong bingo card includes things like ‘blissfully unaware bad guy gets squished’ and ‘cute kid bonds with the big monkey’, you will be legless in no time. It’s certainly no masterpiece, but as mindless Friday-night entertainment, it definitely offers plenty of bang for your buck.

In Australian cinemas now. Out on PVOD in the US and UK Wed Apr 1.

Director:
Adam Wingard
Cast:
Alexander Skarsgard
Millie Bobby Brown
Rebecca Hall
You may also like
Share Tweet
Popular on Time Out
Be the first to know