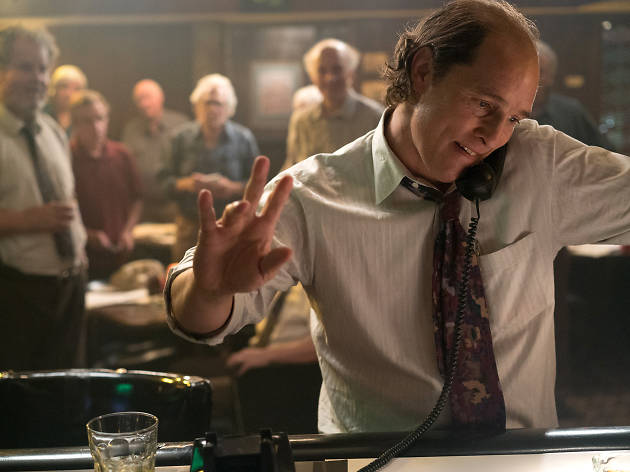 As perky and plastic as the Spandau Ballet song that shares its title, this pacy but uninvolving stock market drama repeatedly swerves the opportunity to do or say anything particularly interesting. Kenny Wells (Matthew McConaughey, with a magnificently receding hairline) is a gold prospector to the core. His grandpa drove a horse cart west in search of riches and his dad is a mining legend. But things haven’t gone well for Kenny – he’s run the family business into the ground, and the big corporations won’t touch him. So he does what every Hollywood hero in a fix has ever done: he gambles his last dime, on a high-stakes mining operation in Indonesia run by disgraced geologist Michael Acosta (Edgar Ramírez). And what do you know? The gold starts flowing.

It’s hard to be entirely bored watching a pot-bellied, malarial McConaughey victory-punching the air as his dreams of vast wealth are finally realised. But there’s not a metric ounce of subtlety in his performance: we never for a moment believe that Kenny is other than he appears, a noisy, Trump-ish buffoon. The supporting cast is strong – Bryce Dallas Howard, Stacy Keach, Toby Kebbell, a creepily Afrikaans Bruce Greenwood – but none of them are given enough to do. And director Stephen Gaghan’s efforts to paper the cracks with well-known indie-pop classics go wildly awry (the sight of McConaughey browsing in a glitzy Texas furniture store to the strains of Joy Division is plain weird).

It’s a pity, because the set-up, loosely inspired by the 1993 Bre-X mining scandal, could have been fascinating. But the script can’t find the right tone, torn between hard-hitting satire on the pitfalls of capitalism and goofy, upbeat we’re-in-the-money clichés. It’s a fine line that ‘The Wolf of Wall Street’ walked with ease – but Gaghan, sadly, is no Scorsese.