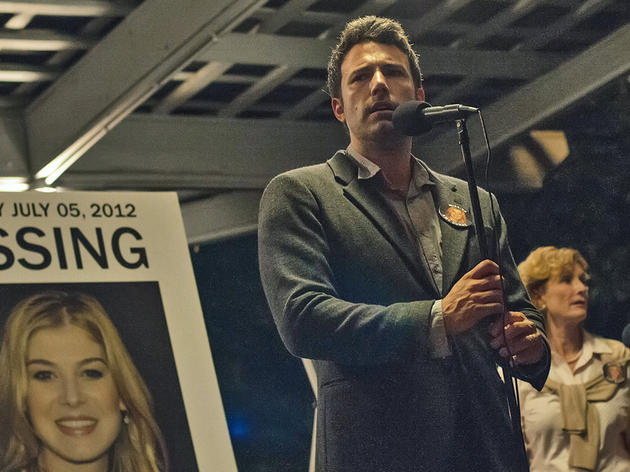 Transformed into the kind of wickedly confident Hollywood thriller you pray to see once in a decade, Gillian Flynn's absorbing missing-wife novel emerges – via a faithful script by the author herself – as the stealthiest comedy since ‘American Psycho’. It's a hypnotically perverse film, one that redeems your faith in studio smarts (but not, alas, in tabloid crime reporting or, indeed, marriage). No secrets will be revealed here, apart from an obvious one: director David Fincher, also the maker of 'Seven', 'Zodiac' and 'The Social Network', is more than just your everyday stylish cynic.

Five years of matrimony haven't been kind to the Dunnes, a pair of formerly dazzling NYC writers rocked by redundancy, family illness and a resentful move to rural Missouri. We learn this early on, after the disaster that kicks off the movie: Nick (Ben Affleck, never better) rushes home from work after a neighbour phones to say his cat has slipped out and the front door is wide open. Inside, he finds shattered glass everywhere but no Amy (Rosamund Pike, delivering a ghostly yet dominant performance that's the year's biggest surprise). Has she been snatched? Cops gather, along with news trucks, Amy's snobby Manhattan parents and a dawning sense that here we have a media frenzy in need of a culprit. Nick, who's a touch too aloof, is the perfect suspect.

Toggling between the developing investigation and flashbacks to the couple's happier days in a Brooklyn brownstone (as did Flynn's original structure), Fincher brews an ominous mood of irreconcilable differences. The director's images – beautifully captured by cinematographer Jeff Cronenweth – don't burn. They chill you with corpse-ready cool. Fully recovered from the dutifulness of his ‘The Girl with the Dragon Tattoo’, Fincher actually flatters and improves on the material with a sneaky theme of performance anxiety: Nick, a ham, pops his engagement ring to Amy in front of a group of bloggers at a launch party for her parents' latest book (the ‘Amazing Amy’ series that's made her family rich). She, in turn, begins to have a hard time pretending to be happy.

‘Gone Girl’, for all its murderous overtones, plays like a sad romantic drama – until the thing happens that no fair critic should reveal, and it becomes unlike anything you've ever seen: a sick, dizzying satire of marital mindfulness. The presence of Tyler Perry as a Johnnie Cochran-like lawyer (the man who repped everyone from Michael Jackson to O J Simpson) is cause enough for laughs. But the deeper chuckle of this movie creeps up on you like a dawning realisation. ‘To have and to hold’ is too easy a way to put it. Go and get clobbered.