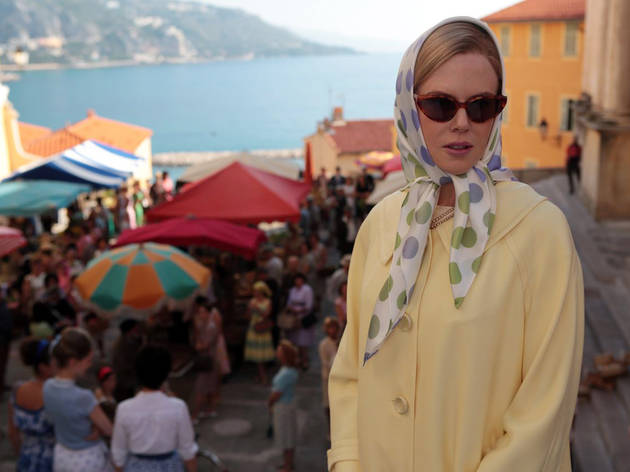 This mostly English-language melodrama sees Nicole Kidman playing Grace Kelly in the late 1950s and early 1960s as she negotiates that oh-so-tricky transition from Hollywood star to princess of a tiny European principality following her marriage to Monaco's Prince Rainier (Tim Roth).

If that doesn't sound like the most perilous of scenarios, then director Olivier Dahan, best known for the Edith Piaf biopic 'La Vie en Rose', and writer Arash Amel totally fail to convince us otherwise. Their soft-focus, sun-drenched and clunky drama gives us a parade of pantomime villains, dreary platitudes about love and duty, overbearing costumes and endless establishing shots of the rocky Riviera outcrop where this limp-wristed soap opera unfolds. Kidman's breathless, blank performance does little to add life or credibility to a script that, looking on the bright side, might have audiences giggling for years to come.

We feel barely any sense of claustrophobia or isolation as Grace struggles to perform what the film asserts is her most challenging role to date: staying married, bringing up children and remaining happy while negotiating the protocols of life as an American in a conservative royal court. It all feels so inconsequential. Moreover, Grace's personal predicament plays out to a backdrop of a Monacan political crisis with France that feels less like a storm in a teacup and more like a brief shower in a thimble. Even Prince Rainier jokes that any war that might arise from Monaco refusing to pay tax to a bullish Charles De Gaulle's government would last no time at all. It's never clear whether we should find Rainier's fear of his gilded life coming to a halt ridiculous or tragic.

Equally problematic is how 'Grace of Monaco' dashes all over the place looking for a theatre for these troubles. For a short stretch of the film Dahan attempts a spin on 'Pygmalion' as a way-over-the-top noble (Derek Jacobi) sets out to train Grace as a princess. At other times he aims for a portrait of oppressive solitude, as Grace fears that her staff and new family are conspiring against her. Then it all segues into a ludicrous political war room drama. Lingering in all this are truly laughable signposts to Grace's tragic death in a car accident two decades later.

Little is left to our imagination or intelligence as characters spout facts and exposition and we're treated to a parade of familiar historical figures in distracting smaller roles, from Hitchcock and Aristotle Onassis to De Gaulle and American secretary of defence Robert McNamara. As Roth forever mops his brow, Kidman remains unreadable and all around them shout and scream. We're left none the wiser as to who Grace actually was, even after a grandstanding final monologue from her at a public event that falls horribly flat. 'Grace of Monaco' could have been a camp delight, but it feels too much like a stodgy, outdated television movie to work even as kitsch.