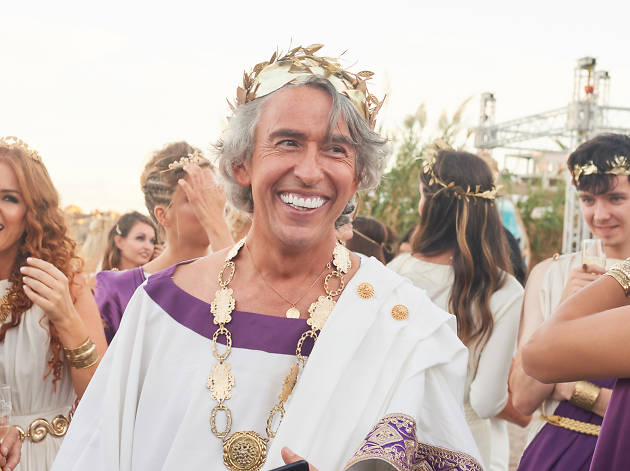 Steve Coogan and Michael Winterbottom team up for a topical satire that lacks the bite it promises.

Despite what you may have heard, ‘Greed’ isn’t about controversial Topshop owner Philip Green. Well, not in the strictest sense. According to the man who plays him, Steve Coogan, its lead character, London high-street mogul Sir Richard ‘Greedy’ McCreadie, is based on several people. Although, adds Coogan, he’s ‘mostly Philip Green’. Coogan and writer-director Michael Winterbottom have been infusing reality with fantasy, not-quite true life with comedy, for two decades, tackling Tony Wilson in ‘24 Hour Party People’, Paul Raymond in ‘The Look of Love’, and most meta of all, Coogan himself in ‘The Trip’. With ‘Greed’, though, they’re on the attack. And behind the artifice, Green looms large.

‘Greed’ dives into the broader implications of such characters, delving into business blow-ups, tax navigations and sweatshop practices, unravelling the cause and effect. McCreadie’s biographer (David Mitchell) provides an entry point into the billionaire’s backstory, but the film mostly focuses on his decadent sixtieth birthday party on Mykonos. This hedonistic shindig is an Ancient Rome-themed toga party put on as a show of power after a hauling over the coals at a government select committee. As McCreadie barks orders at the saps building his faux amphitheatre, he is irked by news of A-list guest no-shows, ‘Leo’ among them, and irritated by a group of Syrian refugees sullying the view.

It is effective in fits and starts, with broad comedy from the likes of Tim Key (always welcome) jostling with something straighter. The scenes unwrapping the younger McCreadie’s rise to power have verve and propulsion, with Jamie Blackley (‘If I Stay’) delivering real bite, a swaggering arrogance and hucksterism showing how he trampled his way to the top. He’s a charismatic bastard: ‘The Phantom Menace’ of fashion.

The present-day stuff is wonkier, the middle-aged McCreadie more of a parody – ironically, he never quite feels like a real person. Much of it is fun, with Winterbottom mining some gold in the party negotiations, but while Coogan is reliably watchable, it’s hardly a stretch for him. And it’s frustrating to sense that there’s a deeper, darker film trying to emerge here. As McCreadie’s sidelined son, Asa Butterfield has edge, but there’s not enough of him, while newcomer Dinita Gohil is brilliant as one of McCreadie’s staff. She offers the film’s moral beacon, playing it straight, and you want more.

There’s righteous fury here, and while Winterbottom and Coogan’s sincerity isn’t in doubt, it feels like they’re coasting a bit. There are laughs, but no surprises and not much heart. They have no love for this guy, but as a result, we’re left with something a little one-dimensional.