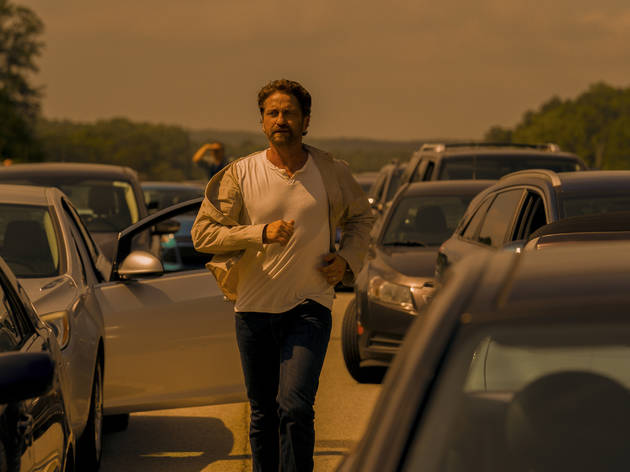 One of those lower-budget disaster movies where major plot developments are relayed mainly via shots of TV news crews – ‘And we go live to.... this huuuge explosion!’ – Greenland is a workmanlike but very watchable showcase for the relatable but ever-grizzled Gerard Butler. All the usual apocalypse movie ingredients are here – a looming ‘extinction level’ event, a family in peril, loads of traffic jams, and a bit where a bunch of weirdos have a roof party – but it’s not without heart and some genuine excitement, especially as the clock ticks down.

The peril here comes in the fiery shape of a planet-killing comet careering towards Earth. Bits of Comet Clarke (almost certainly not named by the general public) are shearing off and landing around the world. Butler’s structural engineer, John Garrity, his estranged wife Allison (Monica Baccarin) and their diabetic young son, Nathan, learn about it when Florida blows up during a birthday party with their neighbours.

Awkwardly, it’s at the party that John and his family find out that they’ve been selected for military evacuation to a Greenland bunker – his professional skills deemed essential for the post-doomsday reconstruction – while the neighbours are all among the left-behinds. It’s the first of a few scenes where the Garritys’ golden ticket becomes as much a curse as a blessing, most of which are handled with efficiency rather than flair by director Ric Roman Waugh (Butler’s Angel Has Fallen director).

The sense of a family in two forms of peril – apocalyptic and domestic – is neatly conveyed, even if the Garretys failed first attempts to reach safe harbour feel like narrative wheel-spinning, especially during the predictable hunt for insulin. But if Greenland could have done with cutting to the chase a bit quicker, the two leads keep you invested. Baccarin is believable as a strong woman fighting a constant tide of panic, while Butler, finally faced with a nemesis too big to punch and too inanimate to dismiss with a salty putdown, goes fairly white-collar here (he’s useless at fighting) and holds things together nicely. In a movie world filled with superheroes, he could be the last everyman standing.

On Amazon Prime in the UK Fri Feb 5. On VOD in the US now.