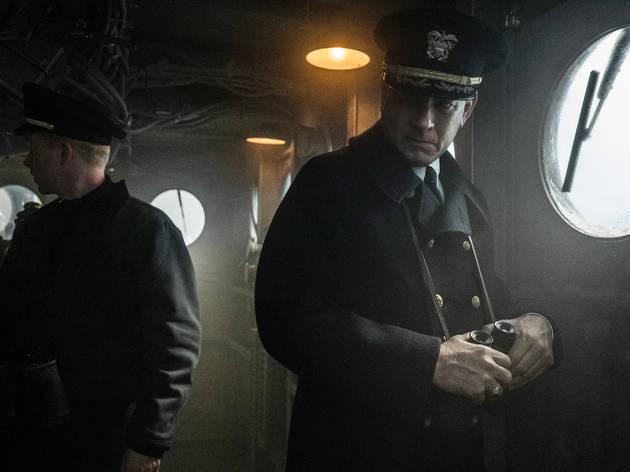 Tom Hanks splices his relatable everyman persona with just a whisper of hangdog self-doubt and a hint of Bible-thumbing faith as a stoical US Navy destroyer captain on the ropes in this breakneck World War II action-thriller. That they’re just about the only discernible personality traits on offer is indicative of a movie that always prioritises pell-mell spectacle over nuanced characterisation. For all that, Greyhound manages to deliver a satisfyingly nervy ride across the U-boat-infested north Atlantic.

Hanks is Captain Ernest Krause, a long-serving naval officer belatedly given his first combat command aboard the USS Keeling (call sign ‘Greyhound’). His task is to usher a 37-ship convoy safely across the daunting ‘Black Pit’, a patch of the Atlantic beyond the reach of Allied air cover. Before he does, he asks his girlfriend (Elizabeth Shue, fleeting) to marry him. Perhaps sensibly, she wants to wait: war has a horrible knack of making widows of newlyweds – especially in 1942 with the Battle of the Atlantic at its furious peak.

It’s a soapy scene handled in fairly cursory fashion, with director Aaron Schneider’s (Get Low) eagerness to get out to sea and into the action palpable. Hanks adapted CS Forester’s novel The Good Shepherd himself and obliges him with a minimum of preamble. We’ve barely met Krause’s two closest comrades, his seasoned second-in-command (Stephen Graham) and the ship’s cook (Rob Morgan), before a blip on the sonar signifies the enemy’s presence, and the ship – and movie– are pretty much at action stations from then on.

Crammed with a complement of interchangeable young sailors (one of them is Hanks’s son Chet, though don’t ask which), Greyhound’s claustrophobic interiors, where the action mostly plays out, hum with tension and brisk professionalism. Portholes are stared out of, horizons scoured and more than one clipboard is nervously fiddled with. A restrained Hanks – even more dialled-back here than in Saving Private Ryan – communicates a sense of pervading fatigue and the burden of pressure, where every decision is life or death, and his crew are watching to see if he can cut the mustard. It’s fair to say that Hanks the actor finds more dimensions in Krause than Hanks the screenwriter. There’s nothing here to match the complexity of Jack Hawkins’s anguished corvette captain in The Cruel Sea.

Greyhound was largely filmed aboard a real wartime vessel, USS Kidd, docked on the Mississippi, with green screen used to fill in the background with whizzing tracers, streaking torpedoes and Nazi U-boats. That mix of authenticity and digital artifice gels okay, but the relentless pacing is a problem in a movie that seems too terrified of being boring to ever get really interesting. You yearn for a little respite to get to know the men better, or a lull to allow the tension to crank up as the U-boats circle.

In an intriguing twist on the genre, the enemy here is largely unseen but not unheard: Krause and co are taunted by a U-boat captain in a manner enjoyably reminiscent of the French soldiers in Monty Python and the Holy Grail (‘Ze ships is zinking!’). It’s probably not strictly true to life, but a little historical hokum doesn’t go amiss amid all the clenched drama.