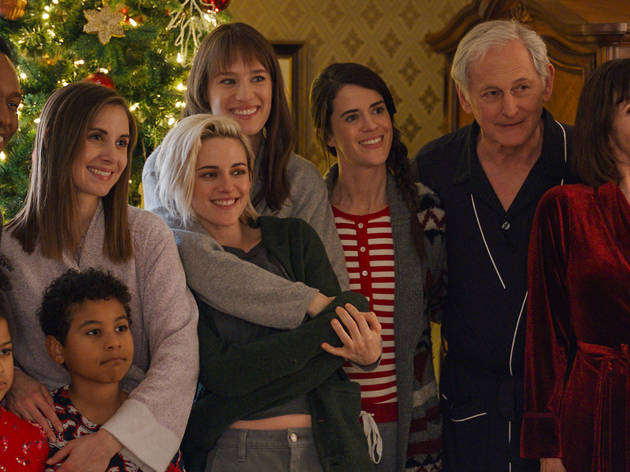 This year has given us a number of unexpected offerings, but a queer Christmas film is not one we saw coming. Co-writer and director Clea DuVall’s Happiest Season follows a lesbian couple, Harper (Mackenzie Davis) and Abby (Kristen Stewart), as they head to Harper’s family home to celebrate the festive season. It’s only halfway through the car journey there that Harper reveals quite a fairly important detail to Abby: she hasn’t come out to her straight-edged, conservative family. Abby, whose plans to propose to her girlfriend over Christmas are scuppered, finds herself taking on the role of Harper’s straight roommate. Cue chaos.

Quite literally made for the role of the awkwardly charming lesbian, Stewart shines as we watch Abby navigate Harper’s overly competitive family and reckon with the slow realisation that the woman she’s fallen for turns into a closeted high-school mean girl when she’s back in her hometown.

Alongside the classic holiday high jinks, Happiest Season promises humorous explorations of personal authenticity, family dynamics (both biological and chosen) and the complexities of queerness. However, it doesn’t quite manage to tick all those boxes and throws you into darker ethical quandaries than you might expect from a festive flick. Most of these – such as Harper’s stream of selfish and questionable decisions – are left barely explored or even acknowledged. You’ll find yourself frustratedly gesturing towards the screen – particularly if you’re a queer viewer – at the clumsy tropes and forced, scripted wokeness. The film certainly makes a valiant attempt to fit as many patriarchy and heteronormativity throwaway comments as it can in 102 minutes.

Thankfully, these moments are offset by just enough levity and joy to get by, often emanating from Abby’s best friend (Schitt’s Creek’s Dan Levy) and Harper’s high-school ex (Aubrey Plaza). Plaza, in particular, gives such a believable and magnetic performance, it almost knocks the rest of the film off its axis.

Happiest Season is exciting, although perhaps less as a festive romcom than as a sign of things to come: stories that centre queer experiences. In the meantime, if you’re settling in to watch this film, prepare yourself for some hearty laughs, occasional teeth-gritting and a healthy dose of Christmas cheer.

Available to stream in the US on Hulu from Nov 25. Streaming in the UK from Nov 26.