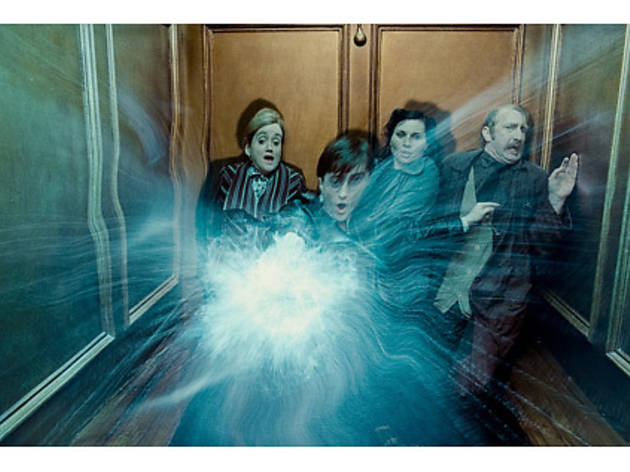 The angst is front and center in the first part of the final Harry Potter adventure---quite understandable, considering that the dark wizard Lord Voldemort (Ralph Fiennes) is now in full control of the magical world. Hermione Granger (Watson) tearily wipes herself from her family's memories to ward off tracers; Ron Weasley (Grint) stands sentry outside his parents' house, looking solemnly to the horizon; and the boy hero himself (Radcliffe) watches as the suburban residence he often reluctantly called home is emptied out for well and good. And that's just the precredits sequence!

Author J.K. Rowling invoked Aeschylus at the start of the Deathly Hallows novel ("Bless the children, give them triumph now," from The Libation Bearers), but the film adaptation affords us little jubilation---an unexpectedly gratifying thing. More than just bolstering the box-office take, splitting the novel into two parts allows us to really feel the weight of the world on our protagonists. Their search for Horcruxes (cursed objects containing pieces of Voldemort's soul) and Hallows (three magical articles that, united, will purportedly grant power over death) is fraught with unrelenting boredom, frustration and loneliness. There's no more Hogwarts School of Witchcraft and Wizardry to provide order and discipline. Now they must make their own way. At the forced start of their quest, Hermione whispers, "We're alone"---a statement that's half observational fact, half existential lament. It resonates in the dark.

The unabating sorrow is surprisingly potent, though it certainly was a running theme throughout the Potter books, and was peeking through several of the previous film adaptations. Rowling's tomes are much more consistent in conveying the emotional darkness. Harry's inner turmoil is always apparent in between the clever wordplay, the schoolroom hardships and the big baddie face-offs. No wonder such a wide swath of readers fell under their spell: Children could see their current growing pains refracted through a slightly more fantastical prism, while adults could give a nod of recognition toward puerile challenges past, but not forgotten.

Much of this is lost in the movies, due to a slavish acquiescence to the letter, rather than the spirit, of the novels. For the most part, they're glorified books on celluloid that pander to the fan base rather than risk the brand name, and audiences have followed more out of familiarity than adoration. Only Alfonso Cuarn's superb Prisoner of Azkaban (the third installment) and David Yates's almost-as-great Order of the Phoenix (the fifth) used the source material for fertile inspiration, finding breathtaking, often heartbreaking, visual corollaries to Harry's adolescent pangs (like the crooked bridge in Azkaban that creakily stretches over an abyss as Harry stands contemplatively at its center).

The first part of Deathly Hallows has plenty of invigorating imagery alongside the pro forma narrative elements. The tale of the Hallows themselves is presented as an exhilarating animated interlude via (this one is for you, Potter groupies) a stupefying digital evocation of shadow puppetry. And Yates, who also directed the sixth movie and the upcoming conclusion, often implies magical occurrences rather than show them directly: When characters apparate to a new location, their arrival is signaled by a rustle of leaves or ripples in the water. It's refreshingly low-tech, and attunes us to the film's immense, overpowering landscapes (beautifully composed by cinematographer Eduardo Serra), which threaten to swallow Harry & Co. whole. The outside world, it seems, can be as menacing as any wand-wielding dark wizard.

For those familiar with the novel, the tragic tenor of this installment appears as if it will complement the toward-the-light euphoria of the series' finale. You can't help but feel, however, that the inevitable happy ending (which is a bit much, even in print) can't possibly do justice to the more melancholy moments, which are the true strength of the movies.

Best-in-show here comes when Harry and Hermione, both at a particularly low ebb, do a touchingly awkward dance to Nick Cave's "O Children." Smiles crack their battle-scarred faces, their frustrations are swallowed up in the swell of friendship, and Cave's prophetic voice sounds as if it is pointing the way (like Aeschylus) to a far-off but exultant point in the future: "O, children/Lift up your voice, lift up your voice/Children/Rejoice, rejoice." Then the distant looks return, the duo abandons the warm embrace and hopelessness descends once more. Yet the despondence is strangely elating; we almost wish the characters would remain in emotional limbo with the quest never quite finished. Try as we might to deny it, there's something truer about that.