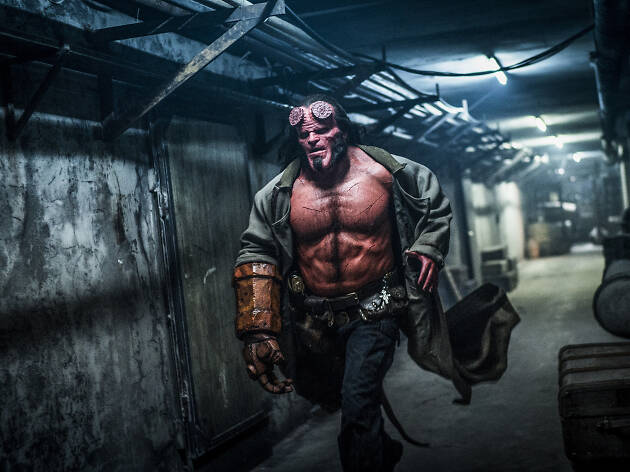 Run and hide from this overbearing, incoherent and unnecessary reboot of the ‘Hellboy’ franchise.

Guillermo del Toro’s two ‘Hellboy’ films (2004, 2008) gave us a lovable outsider with a big heart, a bigger fist and a penchant for cats and cigars, but only the fist survives this horrible redo from director Neil Marshall. Where the Mexican filmmaker brought loads of charm, wit and intricate monster designs, his Brit counterpart delivers gore, gristle and a heap of VFX beasties straight from CGI hell. It’s two hours long but feels like an eternity, boxing your ears as it lurches incoherently from one noisy set-piece to another.

None of this is especially the fault of Hellboy himself (David Harbour from ‘Stranger Things’), who does what he can to inhabit the demon of Mike Mignola’s comic-book series with sardonic one-liners, grumpy likeability and a sense of inner conflict. It is, however, the fault of just about everything else here, from the overstuffed script to a jarringly postmodern prelude set in AD 517. ‘It was known as the Dark Ages,’ smirks the voiceover, ‘and for fuckin’ good reason.’

If that bit of script, presumably lifted from ‘Guy Ritchie’s Big Book of Period Patter’, is meant to set up a self-aware superhero movie, ‘Hellboy’ doesn’t deliver one. Instead, we get a conventional, if blood-soaked, splurge of folklore, origin story, comic-book fan service (Nazi-hunting vigilante Lobster Johnson, anyone?) and monster movie, all set to a bustling blues-rock soundtrack. Knitting it all very loosely together is a barrage of exposition involving Milla Jovovich’s evil Arthurian blood queen Nimue, aka the Lady in the Lake, and the threat of another cinematic apocalypse. It feels like you’ve seen it all before, and if you caught Joe Cornish’s ‘The Kid Who Would Be King’, you have.

As he demonstrated with his early, wonderfully taut no-thrills horrors ‘Dog Soldiers’ and ‘The Descent’, Marshall is happiest arm-deep in gore. Here, with a big budget and a Hollywood studio behind him, he delivers buckets of the stuff but mislays the grand-scale assurance he brought to the epic Battle of the Blackwater episode in ‘Game of Thrones’. There’s the odd nifty camera move but the action sequences are often messy and rote. The self-healing Hellboy is able to withstand endless punishment, which may be faithful to Mignola’s source material but hardly ups the stakes. The audience is not so lucky. Hellboy? Just hell, actually.