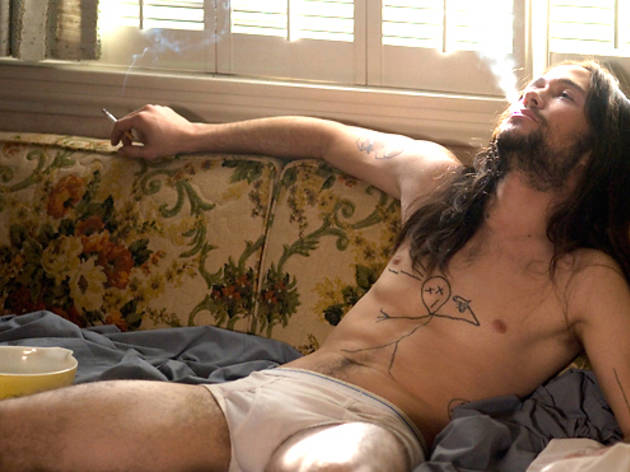 Thirteen-year-old T.J. Forney (Brochu) could use a friend. He's bullied at school, neglected by his pill-popping father (Wilson) and dealing, none too well, with the untimely death of his mother. Enter the mysterious Hesher (Gordon-Levitt), a heavy-metal slacker with a fondness for flames, felonious behavior and fingering vajayjay. He latches onto T.J. like Hobbes the tiger onto Calvin, though he's less an imaginary friend than a dark-side Dr. Phil with a frustratingly opaque fuck-it-all attitude. (In one scene, he stands idly by while our young protagonist is forced to eat a urinal cake---a sure way to stoke the assertive fires within.)

That T.J. and his family willingly allow this headbanging psycho(analyst) to move into their cluttered, dankly lit abode---the emotional damage is palpable, yo!---is just one of the film's many eyebrow-raising contrivances. You can practically hear director Spencer Susser and his coscreenwriter, David Michd, barking to the audience, "Just go with it!" And for a time we do, since, Sundancey redemption-trajectory aside, the film is often unsentimentally tough and committed. Gordon-Levitt assuredly hits his single stoner-shrink note, and saucer-eyed Brochu effortlessly holds the tale on his shoulders, even when things inevitably turn to syrup. (Junkyard-as-repository-of-psychic-trauma sequence, fie on thee!) Plenty else fails: The decision to set the story in a vaguely '80s strip-mall neverland seems mainly a way of justifying the unfortunate pair of specs executive producer Natalie Portman sports as a dim-bulb checkout girl, and a climactic monologue about the loss of a testicle is too impressed with its own profane Road-to-Damascus-moment cleverness. But there's also giddy and affecting inspiration in scenes like the woozily extended encounter among Hesher, Grandma Forney (an unrecognizable Piper Laurie) and a medicinal herb-stuffed water bong. Personal anguish be damned---hash always hashes everything out.