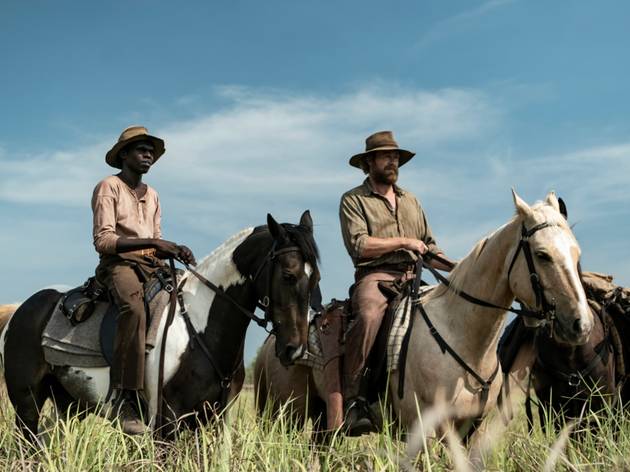 ‘I thought the war was over.’ This telling line hangs heavy at the heart of new Australian thriller High Ground. It’s delivered with wry exasperation by First Nations man Gutjuk, played by astoundingly accomplished newcomer Jacob Junior Nayinggu, to The Mentalist star Simon Baker’s former cop Travis. The year is 1931, and the line is ostensibly about Travis’s service as a sniper in the Great War. Of course World War II would erupt by the end of the decade, but more importantly, it’s a dig about the ongoing Frontier Wars and the white man’s attempt to eradicate the Indigenous population of Australia under the false claim of terra nullius. This razor-sharp Western thrums with the echoes of that great injustice reverberating until today. Will the war ever be over?

Gutjuk is one of only two survivors of the massacre of his tribe 12 years before, an assault that haunts Travis and caused him to leave the force. The other survivor was Gutjuk’s uncle Baywara, played by Sean Mununggurr, who also appeared in High Ground director Stephen Johnson’s previous feature Yolngu Boy. Baywara is out to avenge his family, leading violent attacks on white settler camps. Travis has pressed Gutjuk into service in a desperate attempt to avert all-out war. But neither man fully trusts the other, and both their resolves will be tested by divided loyalties. The men are pursued by sneering bad cop Eddy (a gloriously typecast Callan Mulvey) accompanied by fellow Mystery Road alumnus Aaron Pedersen as tracker Walter, who has no qualms about hunting his own.

This eye-popping film was shot by cinematographer Andrew Commis (Babyteeth) in Arnhem Land and the lush gorges and rocky crags of Kakadu National Park – the filmmakers spent years getting appropriate permissions from local elders, and the respect for the cultures represented here is palpable. If the Travis character skirts the white saviour trope, then this wobble is balanced out by the amount of time devoted to the film’s First Nations cast members. Esmerelda Marimowa is also impressive as a warrior woman. High Ground doesn’t quite have the epic sweep of Warwick Thornton’s Sweet Country, nor the white hot fury of say Jennifer Kent’s The Nightingale, but is nonetheless a powerful indictment on a past Australia has yet to reconcile as a nation. No amount of denial can cover up the sins of the past.