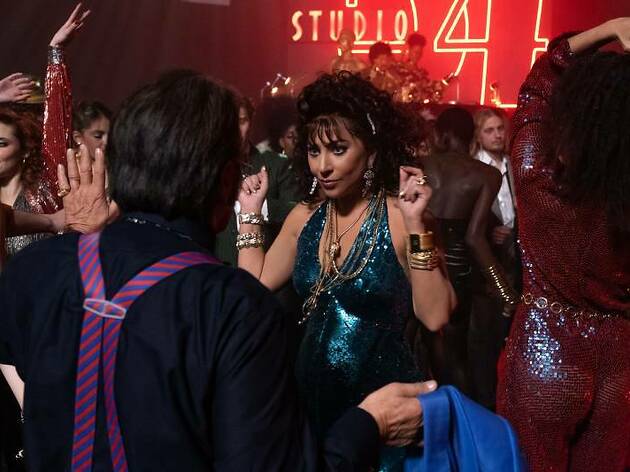 You often heard that studios don’t make large scale, grown-up dramas any more because Hollywood is too obsessed with superheroes and cartoons. Ridley Scott is single-handedly doing his best to reverse that trend. His second film in as many months, after The Last Duel, is uneven, overlong and completely over the top, and has characters and plot turns that Marvel and Pixar would reject as ‘a bit much’. The good news is that it is undeniably a proper drama and, for the most part, wildly entertaining.

Lady Gaga stars as Patrizia Reggiani, an ambitious party girl working for her dad’s business when she meets Maurizio Gucci (Adam Driver), one of the heirs to the fashion empire. She contrives further encounters and sets about seducing him, but his ailing father Rodolfo (Jeremy Irons) won’t accept the woman he sees as an uncultured upstart. After marrying a disinherited Maurizio, Patrizia makes it her mission to restore him to the heart of his family via his uncle Aldo (Al Pacino) and a swanky company job in New York. But the marriage founders as Maurizio’s star rises, and Patrizia discovers too late the downsides of marrying into money.

It’s a grand opera turned crime drama, with Scott casting a scathing eye over rich people’s problems, taking us from overly-competitive rugby games on a Lake Como lawn to shadowy, sterile mansions. It looks gorgeous, of course, with Dariusz Wolski’s cinematography lightly desaturated and faintly gold-tinged, as if to reflect the family’s wealth. But there’s an emptiness beneath the gloss of the film too, and the performances can’t quite fill it.

That’s not for want of trying. Gaga comes closest, building on the promise of A Star is Born with a character who is conniving and ambitious but also easily the most astute of the Gucci clan. Usually portrayed with a cigarette in one hand and either an espresso or a cocktail in the other, she switches from sex kitten to screaming harpy without missing a beat. The film noticeably dips when she’s offscreen, especially when it focuses on the rather sadsack Aldo and the underdeveloped Maurizio, neither of whom have much internal life. Jared Leto, unrecognisable under layers of prosthetics, plays it huge as Aldo’s son Paolo to fill the gap, but mostly is just baffling. Aside from being a target for considerable Gucci cruelty, the substance of the role never justifies Leto’s wild performance.

Then there’s the film’s worst creative decision: having the entirely non-Italian cast speak with cod Italian accents that hover around Super Mario levels of accuracy. It’s impossible to take everything seriously with that filter. Maybe that’s the point, and Scott wants us to see the ridiculousness of this would-be dynasty. Either way, it turns the whole thing from a tale of high fashion to a tale of high camp.