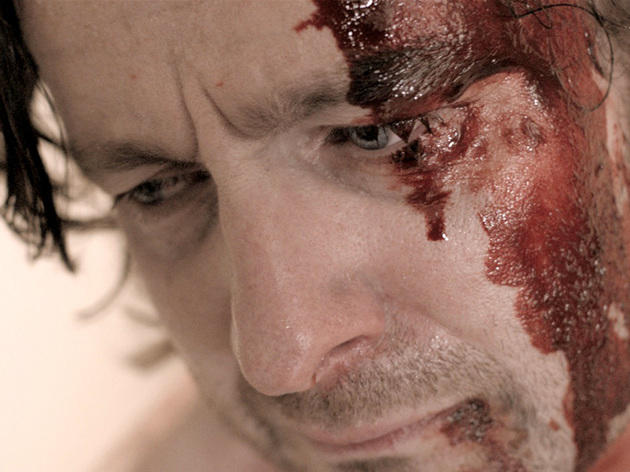 On the surface, the London-set crime thriller ‘Hyena’ has moving parts familiar from the workings of many a murky cop film: a dodgy policeman and his even dodgier boss; an unscrupulous civil servant; brutal Albanian drugs dealers; and a helpless female victim of a sex trafficking ring. But in his follow-up to his seedy serial-killer study ‘Tony’ from 2009, writer-director Gerard Johnson manages to put his own vivid stamp on familiar material. He moves beyond dirty realism to a heightened intensity that’s appropriate for the misadventures of these coked-up bad lieutenants dangerously out of control.

Peter Ferdinando’s Detective Inspector Michael Logan is a man apart – the alpha male in a police unit whose members happily skim a percentage off the gangs. Logan is a keen participant in blunt-instrument takedowns and powder-fuelled carousing, yet he also retains enough of a moral centre to feel uneasy in his own skin. He's also moved by the plight of young Ariana (Elisa Lasowski), a vulnerable pawn in the hands of ferocious blade-wielding Albanian crooks. Ferdinando played the title role in Johnson’s ‘Tony’ and could recently be seen as a flesh-crawlingly sinister inmate in ‘Starred Up’. Here, he’s a revelation: sleazily believable in the worst of company, but always illuminating his character’s inner turmoil without a hint of preening display.

With other story threads involving dubious police colleague Stephen Graham and Richard Dormer as a steely internal investigator, Johnson writes himself more plot than he can squeeze in, which causes the film’s pace and tension to sag. ‘Hyena’ is at its best, though, when Ferdinando’s mesmerising turn works hand in hand with both Matt Johnson’s ominously effective electronic score and the direction’s adept battery of balletic slo-mo, neon colour washes and giddy tracking shots – all recalling the Hong Kong heyday of John Woo and Ringo Lam.

‘Hyena’ is startling, claustrophobic and penetrating in its analysis of the blurred lines involved in doing good. And in once again showcasing the talents of Peter Ferdinando and Gerard Johnson it announces the arrival of a British acting and directing partnership to reckon with. It’s the most powerful homegrown crime flick since ‘Sexy Beast’.