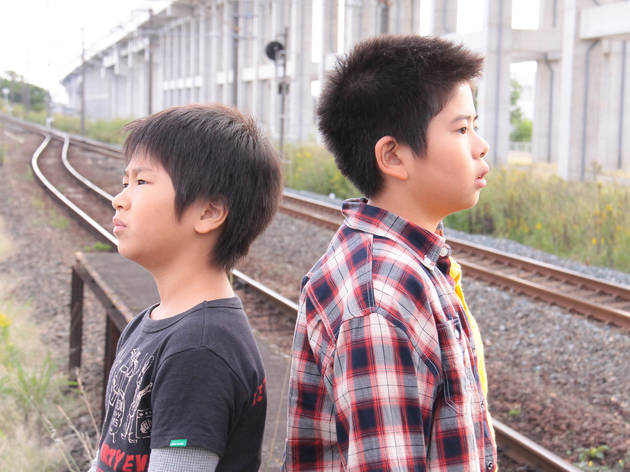 The story behind the latest film from Japanese writer-director Hirokazu Koreeda (‘Nobody Knows’, ‘Still Walking’) is almost as perfect as the film itself: fishing around for young actors to front his unwritten script about a pair of separated brothers, Koreeda stumbled across MaedaMaeda, a hardworking stand-up comedy duo. These brothers had been plying their trade around Japan for three years by the time of their audition, despite the fact that the older sibling, Maeda Koki, was a mere ten years old, while his younger brother Ohshirô was just eight.

Koki plays sturdy, unsentimental
and stoic Koichi, stuck with his mother in the southern city of Kagoshima, beneath the imposing shadow of a live volcano. Ohshirô is Ryu, the tearaway junior sibling, who has stayed in Hakata with his guitar-strumming, easygoing dad. Unable to cope with the speed of change, Koichi is desperate to reunite the family. So, when he hears that a new bullet train line is opening between the two cities, he spies a chance for reconciliation – by the most bizarre, roundabout, magical-thinking method imaginable.

But this threadbare, meandering plot is just a frame upon which Koreeda hangs an intricate,colourful tapestry: while the boys hold the centre ground, the film constantly, restlessly dips in and out of other lives – the boys’ grandfather has a new cake business; Ryu’s best friend Megumi longs to be an actress; an elderly couple miss their ungrateful daughter. The result is a movie which, like its characters, is brimming with energy and curiosity, unable to sit still – at least until an intensely moving climactic still-frame sequence, which brings the entire film into breathtaking focus.

There isn’t a wrong note throughout: Koreeda’s direction is appropriately unshowy, the camerawork crisp and graceful. He guides his young actors beautifully, with frequent improvisation and superb character delineation: the comical disconnect between Koki’s stolid, Oliver Hardy-ish presence and Ohshirô’s lovable, ostentatious mugging is used to hysterical effect. Best of all, the film never gets within spitting distance of sentiment: everything here feels entirely – at times almost unbearably – honest.

Simply put, it’s hard to remember a better film about pre-teen life than ‘I Wish’: every performance works, every character fits, every observation rings true. It’s best summed up by its original Japanese title, ‘Kiseki’: ‘miracle’.