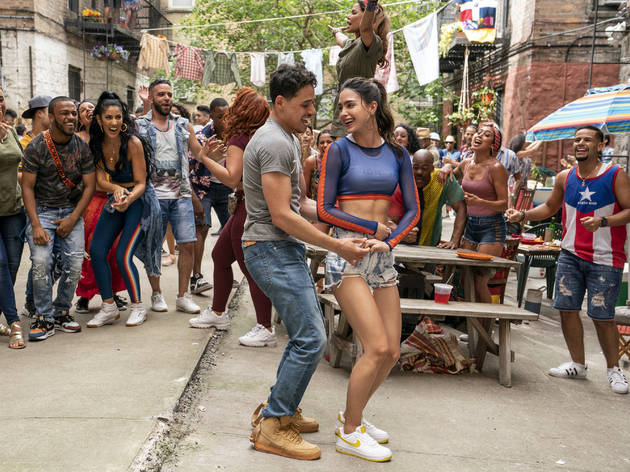 A musical about New York’s dreamers – the traditional kind and the kind Trump wanted to kick out of the country – Lin-Manuel Miranda’s 2008 Broadway hit has been a little overshadowed by the mammoth cultural event that is Hamilton. But if Hamilton reimagined America’s past in uplifting style, this loose-limbed and earworm-loaded hymn to Washington Heights’ Latinx community does the same job for its present.

The result is every cheesy cliché a lazy critic could possibly resort to: toe-tapping, grin-inducing, sincere, and stupidly irresistible. But it also has a righteous anger stitched in among its big tunes and hopeful romances that catch you off guard. This is no mere sugary feelgood fodder.

The biggest dream here belongs to the orphaned Usnavi (Anthony Ramos, ridiculously charming), a twinkly-eyed 29-year-old bodega owner in Washington Heights who yearns to return to his parents’ homeland of the Dominican Republic to run a beach bar. Sure, it’s also the plot of Cocktail but in this Nueva York barrio everything is complicated by struggle: for money, for opportunities, for time, and when a power cut strikes the neighborhood later in the film, even for light.

The film opens with Usnavi on that beach sharing his story with a posse of kids. If it hints that he’s en route to making his dream come true, don’t bank on it. There’s also his dream girl, Vanessa (Melissa Barrera), who yearns to escape her dead-end job at a beauty salon, and his friends, Stanford undergrad Nina (Leslie Grace) and ambitious cab dispatcher Benny (The Walking Dead’s Corey Hawkins), all of whom discover as many snakes as ladders on their path out of upper Manhattan.

Usnavi tells the kids that ‘the streets are made of music’ and, boy, are they: beats are conjured from the spray of a graffiti artist’s can, a street cleaner’s hose provides percussion. There is so much musicality to the everyday here that it makes perfect sense when a hundred or so people break into a choreographed street dance for no obvious reason. Why wouldn’t you when the sun is blazing down and Lin-Manuel Miranda is wandering by selling frosty piraguas.

Miranda’s tunes, a fusion of hip-hop and Latin influences that somehow don’t end up sounding like Cypress Hill, soar – especially in the scene-setting title track and the fiery ‘Blackout’. A few of the non-musical scenes drag – and there aren’t too many musicals with an actual post-credit sting – but the energy rarely flags for long. The editing is sharp and director Jon M Chu, who captured Singapore as a celebratory melting pot in Crazy Rich Asians, repeats the trick for New York, packing a tonne of warmth and summery vibes into every shot. The lactic acid never fully fades from the movie’s muscles as it zips from one splashly choreographed dance sequence to the next.

But cutting through the joy is the shadow of gentrification shattering its tight-knit diaspora and the depressing realities of prejudice. The most moving song, ‘Paciencia y Fe’, has Usnavi’s adopted abuela Claudia (Olga Merediz, reprising her Tony-nominated Broadway role) reflecting on how life in New York never lived up to her dreams growing up in Cuba. His cousin Sonny (Gregory Diaz IV), meanwhile, learns that being a dreamer bars his path to college. ‘Racism in this nation has gone from latent to blatant’ he sings in ‘96,000’, a reminder that 2008’s themes are 2021’s, too – and then some.