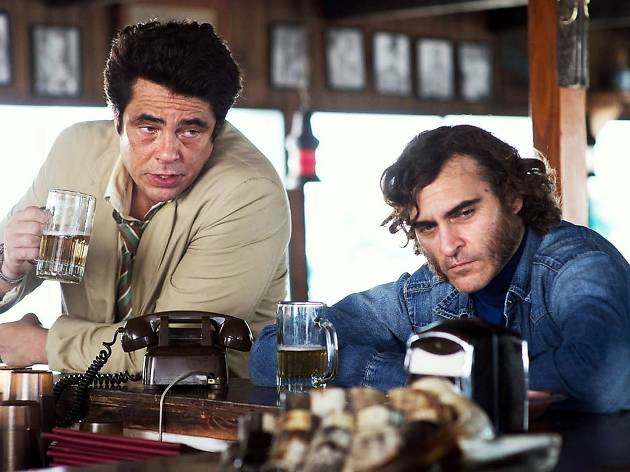 Ever since 'Boogie Nights', the untamable Paul Thomas Anderson ('There Will Be Blood', 'The Master') has thrilled us with the mania of self-made men – porn stars, game-show hosts, oil prospectors and cultists. Now, for a change, the director grabs you by the nose: 'Inherent Vice', Anderson's sexy, swirling latest (based on Thomas Pynchon's exquisite stoner mystery set at the dawn of the '70s), is a wondrously fragrant movie, emanating sweat, the stink of pot clouds and the press of hairy bodies. It's a film you sink into, like a haze on the road, even as it jerks you along with spikes of humour. 'Go back to the beach, you smell like a patchouli fart,' growls Josh Brolin's flat-topped LA detective, Bigfoot Bjornsen, to our dazed hero, Doc (Joaquin Phoenix), an unlikely private eye, but one you can't help rooting for.

We're in a semifictional California, sort of like the real thing but scented with hallucinogenic behaviour, weird restaurant menus and Manson-era paranoia. (Maybe that's not so altered at all.) 'Inherent Vice' is the first time that Pynchon's elaborately dense prose has made it to the screen, and for good reason. Finally, with this novel, a recognisable thrust could be seen: an us-versus-them hippie fantasia decked out in the trappings of noir. Anderson doesn't so much adapt the novel as hawk it up on the screen proudly, in faithful chunks. (His screenplay is said to have received the author's blessing.) And the movie he's ended up with is astounding: literary, loose-limbed and simply impossible to make head or tales of, if you want a straightforward story. Relax a little.

Naively, Doc follows the lead of troubled ex-girlfriend Shasta (Katherine Waterston), nosing his way into a conspiracy involving 'Chinatown'-like land grabs, a coke-addled dentist (Martin Short, dazzling) and a shadowy consortium called the Golden Fang. Don't expect any of this to be explained, not by me nor the film. Even with the added help of an imaginary female sidekick and narrator (Joanna Newsom, slightly vocal-fried and off-period), 'Inherent Vice' dares you to tame it, or compare it to similarly shaggy predecessors – to Robert Altman's radical 'The Long Goodbye' or the Coens' 'The Big Lebowski'. That's doing a disservice to Anderson's achievement. His film isn't mocking itself like a comedy; it's trying something unique, adjusting its rhythms to a wobbling gait and letting the momentum hang. Just as you think Doc's going to get in his car and cruise somewhere productive (Can's propulsive 'Vitamin C' brings the moment to a jittery high), the guy heads down to the shore for a snack. Perhaps he'll get around to it later.

'Inherent Vice' isn't the quite the feast of acting that Anderson usually serves up. Phoenix tries on many shades of squinting paranoia (often hilariously) while Brolin, more flexible in his fury, steals the film away. But the choking self-seriousness of 'The Master' is gone, which feels like a leap forward. As with 'Magnolia' and 'Punch-Drunk Love', the director has created another vivid Los Angeles, one that doesn't lean too hard on its pop-culture references to TV's 'Adam-12' or Neil Young's gentle 'Harvest' album. (Radiohead's Jonny Greenwood, returning once again to do the director's score, makes less of an impression this time.) Anderson burnishes a handful of moments out of Pynchon's lava flow, attending to them with extra concentration: a knockout sex scene lingers with talk until it explodes into raunchy release. Elsewhere, the whispering nervousness of undercover sax player Owen Wilson (just go with it) creates a spell of unease.

Does it all add up? Anderson, like Pynchon, has never been forward with his politics, and, while there may be a death-of-the-counterculture thread to be teased out by nervous viewers, 'Inherent Vice' is probably best left alone to do its thing. I'll take one crystallized scene near the end as catharsis enough: Bigfoot takes Doc's joint, inhales deeply, and frog and scorpion are momentarily friends. To paraphrase Newsom's narrator, the movie is as clear as the vodka you keep in your icebox – which is to say, not clear at all. But it will still get you drunk.