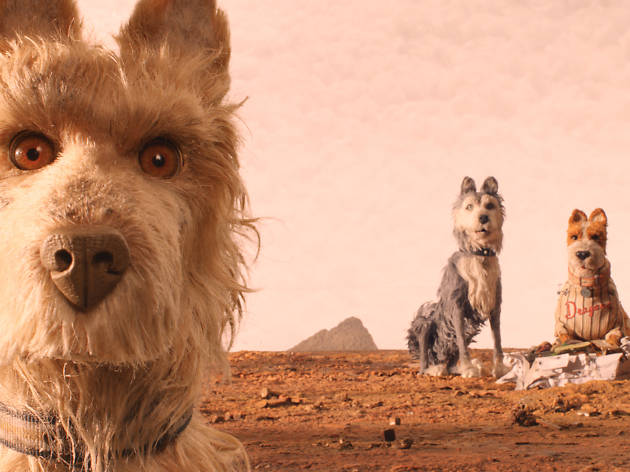 Wes Anderson’s second stop-motion animation after 'Fantastic Mr. Fox' brings the quirk (naturally), but weds it to a timely story of refugee camaraderie.

If Wes Anderson’s 'Fantastic Mr. Fox' was a joyful slice of whimsy, his latest foray into stop-motion creature features is a more complex beast. Set in a near-future Japan, it’s a dystopian, fitfully funny tale in which crusading young people take on a corrupt establishment. But it’s mostly about the dogs: Banished from Megasaki city after outbreaks of snout fever and dog flu, cute canines are dumped on Trash Island and left to fend for themselves amid piles of garbage. In an instant, prize poodles find themselves on equal footing with scrappy strays. Their barks are conveniently translated directly into English for us by a typically Andersonian voice cast: There's a tight pack led by alpha dog Rex (Edward Norton), gossip Duke (Jeff Goldblum), sports mascot Boss (Bill Murray) and pooch actor King (Bob Balaban). Snarling on the sidelines is Chief (Bryan Cranston), who’ll rip your ear off to get to a can of maggots but who slowly emerges as the heart and soul of the story.

Chief’s story kicks in when a 12-year-old Japanese boy, Atari, lands a tiny plane on Trash Island, intent on finding his banished Spots. Atari is the nephew of Kobayashi (voiced by co-writer Kunichi Nomura), the mayor of Megasaki city who bought the animal as a guard dog, only to make Spots the first to be exiled to Trash Island. Atari enlists the help of the pack to roam the dangerous island, with Chief emerging as an unlikely ally. Depicting the bond between boy and dog is what 'Isle of Dogs' does best, and its focus is oddly affecting. While the film's pace is speedy to a fault, it pauses just long enough to ponder on the emotional contract between master and pet.

Bitches, it must be said, are relegated to the sidelines, despite a potential 'Lady and the Tramp' romance between Chief and Scarlett Johansson's ex-show dog Nutmeg. Greta Gerwig voices an American foreign exchange student who does at least prove that females can own dogs, too, but this remains a story about man's best friend (emphasis on man). Stylistically, it’s all unmistakably Anderson, from the persistent drumming of the taiko score to the creaky mechanical cable cars. He milks Japanese culture for humor in ways that feel affectionate if not always respectful; accusations of cultural appropriation won't be easy to shake. As ever with this filmmaker, symmetry is a hallmark, though both visually and narratively, this busy film lacks the serenity and jaw-dropping beauty of 'The Grand Budapest Hotel'. Nor is 'Isle of Dogs' as well-rounded and satisfying as 'Fantastic Mr. Fox'. But as its curious canine cousin, it’s a movie that Anderson fans won't want to miss – as if they could anyway.