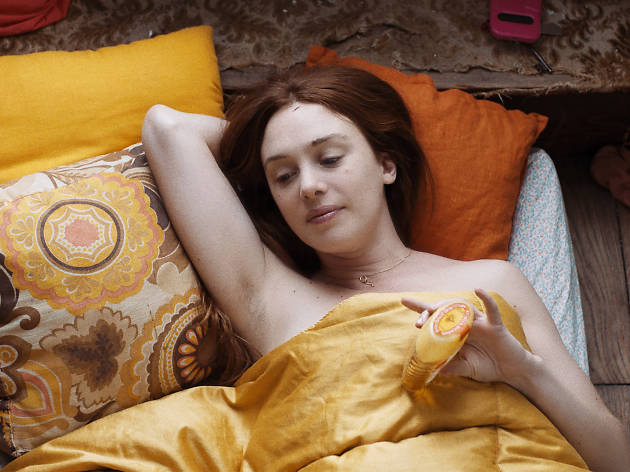 A quirky and uplifting tale of a newly single Parisian woman searching for meaning.

A fey young woman drifts around Paris, fluffy white cat in tow, searching for love and purpose. French director Léonor Serraille’s debut film could easily have been unbearably twee. The fact that it isn’t, at all, is a tribute both to her unsentimental storytelling, and to the prickly strength of Laetitia Dosch’s central performance.

Made by an all-female team, ‘Jeune Femme’ centres on a fiercely original kind of heroine, who cracks jokes and tricks her way into strangers’ lives as she struggles her way through an unforgiving city. Paula is left homeless, friendless and jobless after the ten-year relationship her life revolves around collapses into a black hole. In the film’s only ‘Breakfast at Tiffanys’-esque moment, she abandons her cat, the sole remnant of her old life, in a graveyard, only to be overcome with guilt later. Otherwise, her life of newfound singledom involves the unromantic business of selling off her jewellery, lying her way into part-time work in a knicker boutique, and becoming a live-in nanny to a sulky pre-teen girl.

What makes ‘Jeune Femme’ so satisfying is its restless energy and attention to visual detail. Dosch is a strong physical comedian, capturing Paula’s mercurial energy, whether she’s smashing her head against her ex’s door in heartbreak, or smearing Nutella on her face to entertain a child. Instead of lingering lovingly on Dosch’s face, body, or the city she lives in, the film’s shots follows her gaze: to the people she watches in the street, to the glass front of a vending machine she obsessively checks her hair in, before getting distracted by the bag of Haribo inside.

Paula’s child-like impulsiveness is endlessly funny. But there’s also a sadness to it, because, it gradually emerges, living in the shadow of her older, famous photographer boyfriend never allowed her to grow up, just to grow old enough for him to tire of her. ‘Jeune Femme’ has a real brutality in its depiction of a world where love is conditional: romantic partners, friends and parents have all run out of patience with Paula. Paris is a city that doesn’t like people, she says.

The film doesn’t quite strike the same note of pessimism, however. Its closely naturalistic style reveals the small moments of kindness and connection she finds in an inhospitable city, and Paula’s resilient potential to grow out of romance into something better.