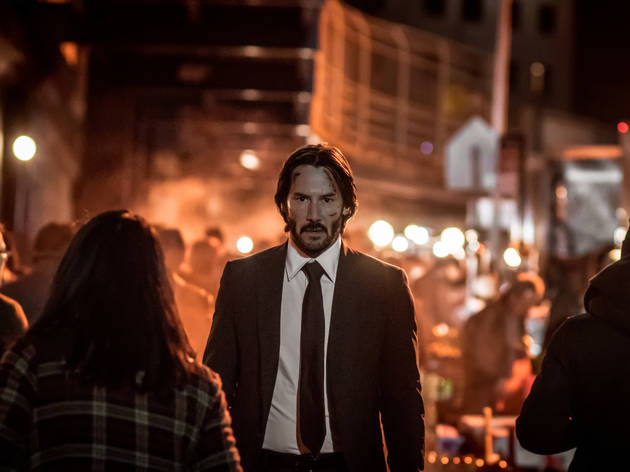 Before you get funny, no, they haven’t come for his cat this time. Keanu Reeves is back as the taciturn ex-assassin prone to murderous rages: 2014’s ‘John Wick’ saw him taking on the Russian mobsters who killed his dog (it reminded him of his dead wife, so he was all upset). But now it turns out John’s unsanctioned rampage broke the laws that all hired killers follow, and he’ll have to face the consequences. The ensuing hijinks will take him from New York to Rome and back again, staying one step ahead of his former colleagues.

‘John Wick: Chapter 2’ opens with a movie projected on a wall, as our hero races past an outdoor screening of a silent slapstick comedy. It’s an unsubtle but appropriate image: none of this is meant to be taken too seriously, just sit back and enjoy the stunts, the speed, the style. Reeves has more than a touch of Buster Keaton about him too, staying stony-faced as he blasts, karate-kicks and throat-punches his way through literally hundreds of faceless underworld goons.

And what a stupendously entertaining ride it is. Director and former stuntman Chad Stahelski is back in the director’s chair, and he knows his craft inside out: every punch lands hard, every gunshot roars like thunder. Neon-lit and gloomy, the film is lovely to look at – think Nicolas Winding Refn without the pretension. The humour is charmingly self-deprecating – a series of adversarial grunt-offs between Reeves and fellow assassin Cassian (Common) are a highlight – and the testosterone-heavy supporting cast is terrific: Laurence Fishburne, Franco Nero, Ian McShane, ‘Warriors’ legend David Patrick Kelly and even Peter Serafinowicz all grab their moment in the spotlight. But it’s Keanu’s film, and he’s a joy to watch: loose, long-limbed and achingly cool in a three-piece black suit, he makes mass murder look completely effortless.