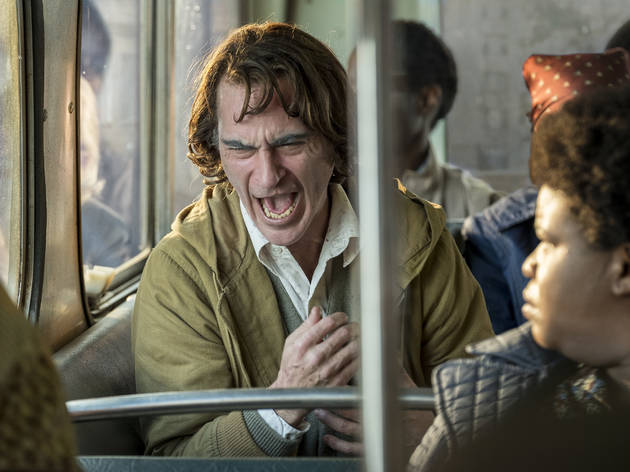 Joaquin Phoenix is devastating as the villain-in-the-making in this incendiary tale of psychological escape and psychopathy.

It's the laugh that gets you first: Joaquin Phoenix’s half cackle, half rasp has all the soothing aural balm of a vulture in a blender. It’ll be rattling around in your ears long after the old-school ‘The End’ card flashes up on this unrelenting, grimly funny and brilliantly visceral reinvention of the DC supervillain. This is a truly nightmarish vision of late-era capitalism – arguably the best social horror film since ‘Get Out’ – and Phoenix is magnetic in it. He runs Heath Ledger cigarette paper-close as the finest screen Joker.

Like everything in this drum-tight movie, the title’s lack of pronoun is no accident: it’s not the fully formed Joker being introduced here, but Arthur Fleck, a man whose ambition to tell jokes for a living is at odds with the living he scraps as a clown-for-hire on Gotham’s grimy streets. Judging by the movies playing – ‘Excalibur’ and ‘Blow Out’ – it’s 1981, but it feels more like the ’70s of ‘Death Wish’. He lives with his frail mum (Frances Conroy) in a broken-down tenement, eking out a little joy watching a TV chat show hosted with oily relish by Murray Franklin (Robert De Niro). He’s on seven types of medication and has a neurological condition that causes him to laugh – okay, cackle – uncontrollably.

In these domestic early scenes, Phoenix establishes Arthur as a man who sees himself less as an underdog than a mutt waiting to be put down. ‘I just don’t want to feel so bad any more,’ he says. And no wonder: it’s a seriously bleak world he inhabits, a cityscape leached of colour and joy, where even ‘super rats’ can’t get through all the trash that’s piling up. Director Todd Phillips (‘Old School’) does a great job of giving a sense of a place wound too tight. People have retreated into themselves and small kindnesses have been ditched. Arthur’s own awkward efforts to connect are only met with hostility. ‘Is it just me or is it getting crazier out there?’ he asks his social worker. Tellingly, she agrees.

If ‘Joker’ often feels like the product of a binge of early Scorsese movies – ‘The King of Comedy’ and ‘Taxi Driver’, in particular – this character isn’t just a makeup-smeared facsimile of Robert De Niro’s traumatised Vietnam veteran. He’s the product of a society that feels painfully current. He needs help, but there’s no help out there for him.

When Arthur does finally snap, it comes in a tensely mounted subway scene – involving three bankers – that’s cleverly strobed by passing tunnels. It’s short, bloody and has incendiary consequences – an accidental spark for an Occupy-style movement across the city. Like the Guy Fawkes mask in ‘V for Vendetta’, Arthur’s clown makeup is adopted as the face of the protest, and as he graduates into his Joker persona he becomes a figurehead for the angry mob. But is this a tired city rising up in protest, or a criminal army? Gotham’s fat cat Thomas Wayne (Brett Cullen) has more than a hint of Donald Trump, but surely the Joker is nothing if not an accidental populist himself? Expect the Twitterstorms to rage and the hot takes to be legion.

But if the film’s politics get a little murky, ‘Joker’ never operates in a world of black and white certainties. And it never feels like a conventional comic book origin story, either. Its psychological detail is sketched in increments; information drip-fed rather than splurged. Phillips and his co-writer Scott Silver’s (‘8 Mile’) screenplay works hard to keep the audience off-balance, delivering one stellar rug-pull that establishes it as a film that exists – at least in part – in the head of its protagonist.

‘Joker’ smartly manoeuvres the story around the DC universe too. The connective tissue here is Wayne Sr. He’s an old employer of Fleck’s mum and an arrogant blowhard. ‘Batman’ diehards may freak at this depiction of Bruce’s dad as the nasty face of capitalism – he’s a world away from Linus Roache’s gentle patriarch in ‘Batman Begins’ – but in truth, ‘Joker’ doesn’t try to upturn too many tables in the DC universe. Who knows? He may still need to do battle with Robert Pattinson’s Batman. On this evidence, it’d be brutal.