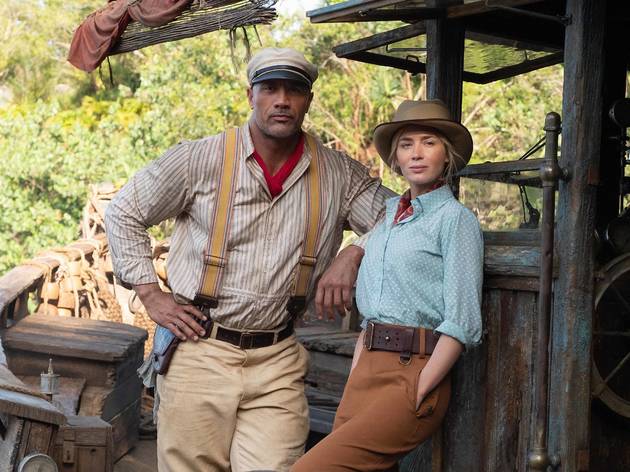 You can almost see the mood board that led to the creation of Jungle Cruise, the latest Disney movie to take its name from a theme park ride. There’s a lot of The Mummy (a female academic goes in search of a mythical something-or-other and enlists the help of a brawny adventurer), a bit of Indiana Jones (an eccentrically evil German tries to beat them to it), and generous dollops of The African Queen (boaty romance; jaunty hats) and Pirates of the Caribbean (cursed CGI baddies made of jungle detritus). It seems rather coldly engineered, but that doesn’t mean the result is without charm. In fact, it’s packed with it.

A huge part of the reason Jungle Cruise clips along cheerfully is the perfect casting of Emily Blunt and Dwayne Johnson. Blunt is Lily Houghton, a scientist in the early 1900s who is shunned by London’s academic community because she’s a woman. Fed up with waiting for permission to conduct her work, Lily steals an ancient arrowhead that she believes will lead her to a mythical tree in the Amazon jungle that has the power to cure all ills. She’s witty, warm and resourceful – i.e. ideal for Blunt. Johnson is Frank, a sardonic steamboat captain who knows every inch of the Amazon and agrees to help Lily find the tree.

Together they are pure joy: chalk and cheese, yet perfectly complementary; flirtily bickering their way through almost every moment. Their clear enjoyment is infectious, and their sheer charisma helps smooth the rougher parts of the script (expect a lot of puns). Director Jaume Collet-Serra (The Shallows) clearly knows what he has here and gives his leads plenty of time to breathe. His action sequences are solid, if unremarkable, but he knows what the film needs: as much Blunt and Johnson as possible.

The silly, jolly throwback mood is fun for the most part, but sometimes retro in the wrong way. A few jokes about funny German accents are clumsy, but the strangest misstep is Jack Whitehall’s McGregor. Casting a straight man to play an effete, pampered gay man feels wildly misjudged. Big-budget Disney movies have long been criticised for lacking LGBTQ+ representation on screen, so to attempt representation with a gay caricature and cast a straight actor to play him seems the worst choice they could have made. That significant bungle stands out, though, because it’s one of the few made. This ride with Johnson and Blunt is so purely entertaining you may well want to go round again.