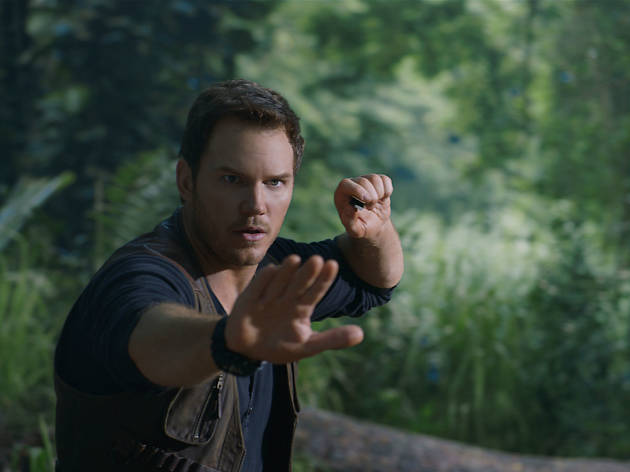 There's a seen-it-all-before quality to this sequel but JA Bayona’s horror influences bring some lovely touches to the dino action.

This fun, pacy addition to the dino disaster franchise doesn’t do much that’s particularly new – though what it does, it does with a fair whack of panache. That’s largely thanks to gifted Spanish director JA Bayona, who brings to bear the macabre touches that made ‘The Orphanage’ such a spooky treat. Short of bringing Mr DNA back as a flesh-craving zombie, ‘Fallen Kingdom’ is as close as the ‘Jurassic’ movies are going to come to a horror film and it gels nicely with a franchise that’s always had a gleefully sadistic streak. It’s at its most fun when things (limbs, mainly) are going bump in the dark in a third act that pays homage to classic horror films.

Kicking off where ‘Jurassic World’ left off, we find cloning corporation InGen picking up the pieces after the catastrophic collapse of its dinosaur park. Not only is Isla Nubla now overrun with prehistoric critters, the island’s dormant volcano is erupting – seriously, were there no islands without volcanos? – and about to make them all extinct again. Cue dino rights activist Claire Dearing (Bryce Dallas Howard, swapping the heels for boots this time) and wisecracking raptor trainer Owen Grady (Chris Pratt) to help with the seemingly suicidal rescue mission and share some feisty chemistry. Jeff Goldblum’s Dr Ian Malcolm returns with doomy warnings about where all this Dino Lives Matter fervour will lead.

There’s more than an echo of ‘Jurassic Park: Lost World’ in all this, right down to the gnarly and extremely edible military types who accompany Claire and Owen back to the island. Bayona, though, banishes that sense of old ground being revisited in one virtuoso action sequence, spiralling his camera between fleeing humans and dinosaurs with molten lava in pursuit. In its midst, he even manages to stage a fight between a T-Rex and a stegosaurus that will settle a thousand playground disputes.

The second half opens up the story in more surprising ways, though there’s still the lingering feeling of a ‘Jurassic Park’ greatest hits medley playing out as an array of dinosaurs, new and old, are let loose afresh against a backdrop of corporate villainy. One of them can even open doors, a terrifying new trait that will take some topping in the next movie. A dinosaur that can disconnect your wifi, perhaps?