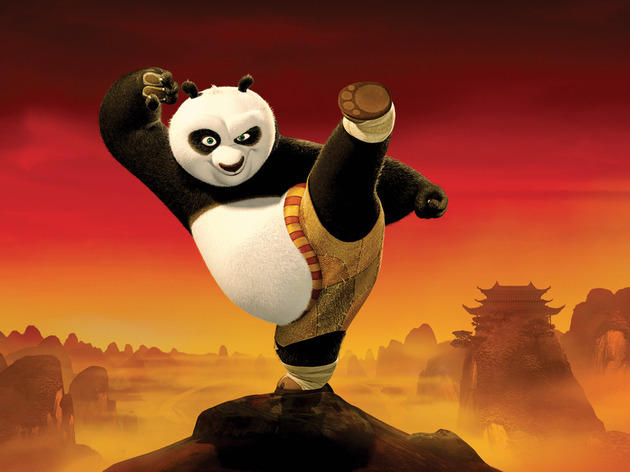 ‘Kung-Fu Panda’ is one of those movies where one assumes the title came first and the entire plot was then extrapolated by committee. Rotund, noodle-selling bear Po (voiced by Jack Black) discovers that he is the living embodiment of an ancient Shaolin legend, which drives him to train as a martial arts expert and confront psychotic snow leopard Tai-Lung. He’s aided on his quest by crotchety Zen master Shifu (Dustin Hoffman) and his menagerie of high-flying wire-fu legends, the Furious Five.

There’s no chop-socky cliché too hackneyed for the filmmakers to make meat of. Inscrutable, riddle-spouting guru, check. Ancient mystical jade temple, check. Uptempo training montage, check. The setting is a sort of Disneyland version of ancient China, all fast-running waterfalls, snapping chopsticks and spiralling bamboo parasols. The script is as thin as rice paper and the characters, though likeable, are simply too plentiful, and too many of them feel short-changed.

The ending was extensively rewritten and it shows, limping to an underwhelming conclusion from which many of the best characters are inexplicably absent. But for all its faults, there’s something inescapably likeable about ‘Kung-Fu Panda’. Po is a winning hero, engagingly silly and offbeat, particularly in his workout scenes with the frustrated, irascible Shifu. Villain Tai-Lung, voiced with fearsome dignity by Ian McShane, is one of the best cartoon baddies since Shere Khan, and his prison-escape set piece is the standout here, explosive and enthralling.

This is where the movie comes into its own. The action sequences are often astounding, the high-octane animated choreography superbly executed. There’s nothing radical about the visuals themselves – the character and landscape design is entirely by-the-numbers. But we’ve never seen a cartoon move this fast before, the ‘camera’ leaping and swooping along with its gravity-proof protagonists.

As the credits roll, the film’s many flaws come sharply into focus. But while it lasts, ‘Kung-Fu Panda’ is something of a guilty treat.

Director:
John Stevenson, Mark Osborne
Screenwriter:
Jonathan Aibel, Glenn Berger
You may also like
Popular movies
We know this city. Do you?