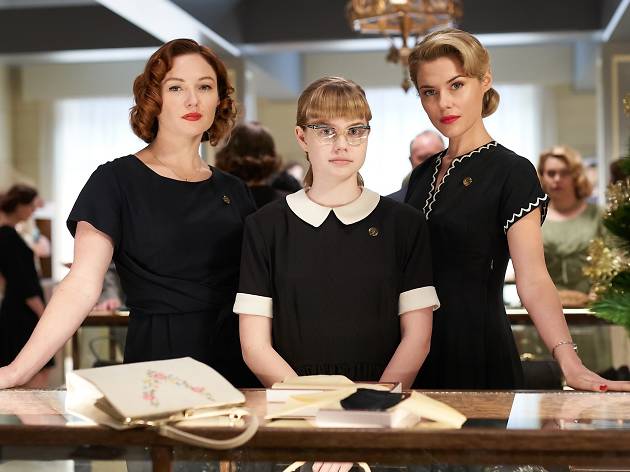 Bruce Beresford’s days as the director of internationally admired fare such as Breaker Morant, Driving Miss Daisy and Black Robe may be a long way behind him, but he still knows how to win over a hometown crowd. His 2009 immigrant tale Mao’s Last Dancer was a big hit in Australia, and now he brings to the screen a long-cherished adaptation of a novel by his late friend Madeleine St John that seems as likely to delight its target audience as it will mystify those unfamiliar with such Australian tropes as cultural cringe and she’ll-be-right-mate.

Over the Christmas rush period of 1959 we meet three women who work the fashion floor of Sydney department store Goode’s. Lesley (Angourie Rice) is the newbie, a dowdy 16 year old who hopes to win a scholarship to the University of Sydney and arrives for a summer job so ripe for reinvention that she has adopted the name ‘Lisa’. Patty (Alison McGirr) longs for a child, but her gormless husband barely touches her, while Fay (Rachael Taylor) is a looker with a past, exasperated with the cricket-obsessed Aussie men offered up to her and who has her prayers answered with the arrival of a dashing Hungarian suitor called Rudi (Ryan Corr). These are women who long for something more than drab, pre-multicultural 1950s Australia can offer them, and who gravitate to Goode’s as an oasis of glamour. The store’s worldly Slovenian fashion buyer, Magda (UK star Julia Ormond), soon recognises Lesley/Lisa as a kindred spirit and invites her to get-togethers at her home with her Hungarian husband Stefan (Vincent Perez) and other “reffos”, who represent the wider world and the nation’s pluralistic future. Lisa’s homelife, by contrast, is stuck in the ’50s, with a well-meaning mum (Susie Porter) who sews pink frilly dresses and an ocker dad (a scene-stealing Shane Jacobson) who can’t understand why she’d want to go to uni with all those libertarians and commies.

When Faye starts reading Lisa’s copy of Anna Karenina, you might reasonably expect some tragedy to loom on the horizon, but there is curiously little conflict in Ladies in Black to darken anyone’s sunny day. Even the imperious floorwalker played by Noni Hazelhurst is far less of a harridan than convention would dictate, and the Anglo men are not so much oppressors as lovable drongos whose sexism and xenophobia are nothing that patience and a taste of salami can’t cure. Beresford has a strong track record as a teller of women’s stories, but there’s none of the bite of a Puberty Blues here. It’s simply a slick nostalgia package, gift-wrapped with a bow on top.