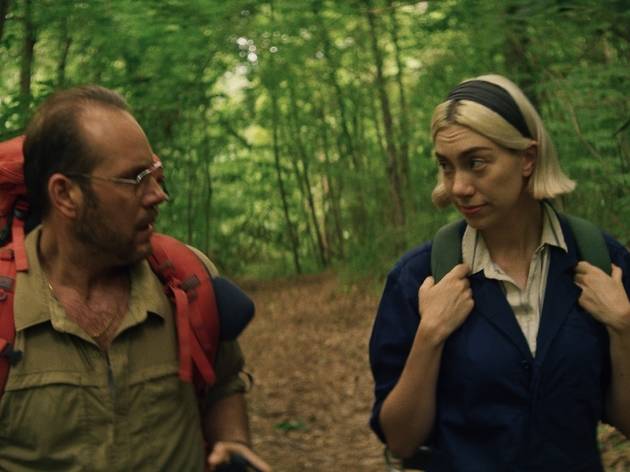 The future is here, and it’s a pain in the ass. Early on in low-budget sci-fi Lapsis, a schlubby delivery guy, Ray (Dean Imperial), cops a parking fine because his outdated, non-quantum computer has given him the wrong information. It’s the kind of everyday annoyance that cuts an audience more deeply than any number of alien invasion scenarios – because who hasn’t been flummoxed by a software upgrade on their device that they never asked for? The way technology that’s supposed to liberate us actually makes our lives smaller is the subject of this thoughtful feature from writer-director Noah Hutton (a documentary maker and son of 1980s movie stars Debra Winger and Timothy Hutton).

In the quantum near-future, large, imposing cubes dot the landscape and all existing cabling must be replaced with a vast new network of links. As a result there are jobs to be had for people willing to hike across country with loops of cable in tow. But there’s a catch: small, tortoise-like robots called ‘Carts’ are also on the job. Get overtaken by a Cart and your lucrative route fee vanishes leaving you with nothing but sore feet. Ray, who needs a better-paying job to cover the medical bills of his younger brother Jamie (Babe Howard), enters the cabling game through the backdoor thanks to some wheeling and dealing by his friend Felix (James McDaniel) and quickly finds that his assigned login, ‘Lapsis Beeftech’, gives him a range of unfair advantages as an employee – advantages that quickly make him the target of his resentful co-workers.

The film has in its sights the gig economy: app-based careers that offer flexibility but little security to contractors lured by the promise of effort-driven rewards. And for a while its satire hits the bullseye: when Ray strays from his given route a buzzer chastises him, and stopping for an unscheduled break causes his GPS to bark “Rest denied.” Resistance arrives in the character of fellow cabler Annie (Madeline Wise), wearing bottle-blonde hair and a supremely nonplussed expression, who quickly shoots down Ray’s rose-coloured, libertarian view of the world. The choice to costume Ray like a 1970s gangster is distracting, however, and Hutton’s script could have done with a few more drafts – the answer to the mystery of Lapsis Beeftech’s true identity is an anticlimax. Still, it’s a promising debut that will resonate with anyone who has a beef with tech.

Director:
Noah Hutton
Screenwriter:
Noah Hutton
Cast:
Dean Imperial
Arliss Howard
You may also like
Popular movies
We know this city. Do you?