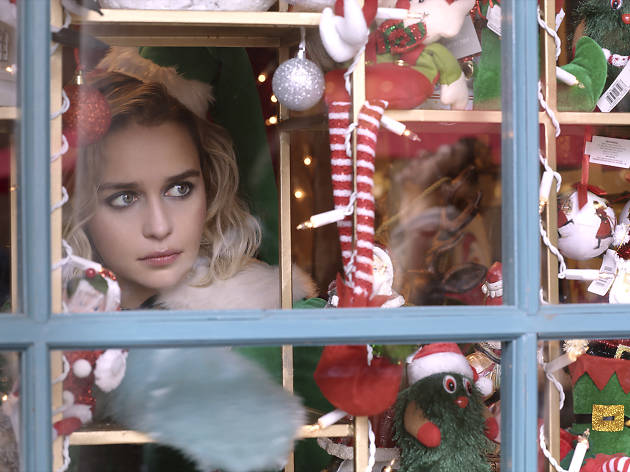 Like a mug of eggnog dosed with a slug of gin, this mostly fizzy Christmas rom-com delivers its cosy message with a side order of cynicism.

If Helen Fielding reworked ‘A Christmas Carol’ subbing in Bridget Jones for Ebenezer Scrooge, it might look a little like this good-natured but lightweight romcom about a struggling twentysomething finding salvation in a handsome stranger. If you can turn a blind eye to an earnestly delivered but daft third-act twist that the film’s trailer telegraphed months ago, and some low-flame chemistry between Emilia Clarke and Henry Golding, ‘Last Christmas’ is a feel-nice addition to the festive canon. It’s purpose-built for anyone who’s watched ‘The Holiday’ maybe six times too often.

Clarke plays Kate, a wannabe singer with a deep love for George Michael, humiliatingly forced to dress as an elf working for the owner of a Covent Garden Christmas shop (Michelle Yeoh). ‘I’m not a career elf,’ she stresses, though such is her wrecking-ball approach to life, you suspect she’d be sued for reputational damage by other elves if she was. Enter Golding’s mysterious stranger, Tom, a bike courier and a great listener who starts to reintroduce some hope to her life. But who is he? And why does he seem to have one coat and (yikes) no phone?

Soundtracked by wall-to-wall Wham! and George Michael tunes (several versions of the title song feature, including a couple that amusingly emanate from festive tat in the shop), their burgeoning romance takes in the sights of a picture-postcard London. Bar a notably sombre middle-act dip, American director Paul Feig (‘Bridesmaids’) handles it all briskly. In the spirit of all good Christmas movies, it’s wildly untroubled by geography (Islington to Covent Garden via Brixton?) or realism (strangers talk to each other – on an actual bus). And though the film makes a genuine attempt to engage with the city’s homelessness problem – there’s a subplot based at a shelter – and nods towards the challenges of migrants, it’s done in a superficial way that makes Richard Curtis look like Ken Loach.

The dialogue is a blunt instrument at times (‘A shitting bird just shat in my eye,’ grumbles Kate in a not-exactly-Nora-Ephron moment), but when the witticisms dry up, the charm of the cast mostly carries you along. Clarke is engaging as the cynical but not quite embittered Kate, a childhood immigrant from the former Yugoslavia. Emma Thompson (who co-wrote the screenplay with Bryony Kimmings) is a hoot as her alpha mum, who keeps memories of the old country alive by wailing folk songs at her daughter. Even Yeoh’s sternness takes on a new comic dimension when backdropped by a ton of Christmas kitsch.

If ‘Last Christmas’ isn’t quite irresistible in its emotional moments and the cheesiest bits are borderline indigestible, its effervescence makes it a fun enough watch. At the very least, it’ll make you fall hard for its other romantic lead: London.