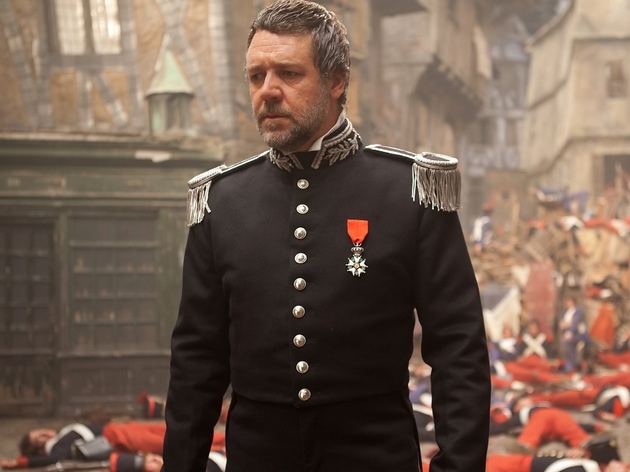 Do you hate musicals? Do you think West End shows are naff – only fit for tourists and visiting aunties? Well, you might find yourself converted by Tom Hooper’s rabble-rousing film of London’s longest running musical (staggering fact: 60 million people worldwide have seen ‘Les Mis’). On Hooper’s side is a dream cast of Hollywood’s finest performing live on camera – including Anne Hathaway singing her heart out. I went in cockily arrogant that I’d be immune to the power of the show tune. I ended up using my cardy sleeve as a tissue.

Not everyone will be sold. You might feel battered by ‘Les Mis’. Everything about this film is epic: its marathon two-and-a-half-hour running time (not bad considering Victor Hugo’s novel is 1,400 pages); the actors’ faces filling the screen in close-ups; the emotional thwack of Claude-Michel Schönberg’s earworm-ish numbers. What gives it a beating heart is that the actors are singing live. The norm is to record songs in a studio then lip-synch in front of the camera. Which looks fake. Here, when Hugh Jackman sings ‘How can I face myself again?’ as he contemplates letting another man go to prison (a case of mistaken identity, long story) his voice is hardly a whisper.

Jackman gives a big, strong performance as Jean Valjean – scarily emaciated at the start, when the Frenchman is released from a chain-gang in 1815 after serving 19 years for stealing a loaf of bread.
A bitter and broken man, his life is changed by an act of kindness. Russell Crowe is Javert, the obsessive policeman who stalks him like a bad conscience (the less said about his singing the better).

But the heart of the film belongs to Anne Hathaway, on screen for just 15 minutes as Fantine – the factory girl forced by poverty into prostitution (another long story). When Susan Boyle sang ‘I Dreamed a Dream’, she belted it out like Elaine Paige. Here Hathaway reinvents the song as a cry from the heart – filmed in a single take, her face full of shame, eyes burning
with rage.

The film sags a bit in the middle – like the musical and the book (yes, yes, it’s a masterpiece). But there’s plenty to keep us entertained. Sacha Baron Cohen and Helena Bonham Carter are very funny as the foul-mouthed, black-hearted Thénardiers (she gets the best line: ‘He ain’t worth my spit’– she’s talking about her husband). Tom Hooper gets a bit carried away with swoopy shots, and the close-ups are unrelenting, but crucially he lets the filth and the squalor in. And there’s a thread running from his last film, ‘The King’s Speech’. Like Bertie, Jean Valjean is striving to become the best man that he can be. And after a few delicate sniffles on my part, his final words did for me – as he sings about his adopted daughter Cosette: ‘She’s the best of my life.’