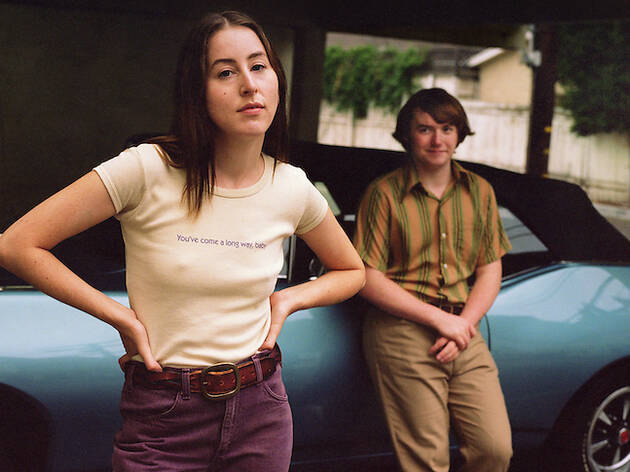 A big cartwheel of a movie, Paul Thomas Anderson’s sweet coming-of-age yarn is free-spirited and fun as hell

Paul Thomas Anderson’s sunniest movie yet (admittedly, not an especially high bar to clear) this San Fernando Valley palimpsest is so buoyant and bubbly, it practically floats off the screen. It’s the giddiness that grabs you in the Californian’s latest gem, and the dizzying sense of possibility and innocence. It left me with a contact high.

Licorice Pizza’s greatest coup, though, is its casting. Somehow a pair of novices – albeit one with some serious acting pedigree – its two headliners are born to their roles. Alana Haim, of LA band Haim, is 25-year-old Alana Kane, a photographer’s assistant bemused to find herself being asked out by Gary Valentine, a smooth-talking high-schooler ten years her junior. He’s a child actor with a Lucille Ball-like hit sitcom to his name and commensurate levels of self-confidence.

Their evolving relationship, a much less carnal one than Gary would like, gives this fast, loose and loveable movie its spine. Cooper Hoffman, son of the late, great Philip Seymour Hoffman, continues the family tradition of being terrific in a Paul Thomas Anderson movie. Gary never lets the age differential quench his ardour, although his lack of a driving licence and penchant for ordering Cokes looks like a dealbreaker with Alana fast approaching her martini era.

Alana Haim is flat-out great as her firstnamesake, a tricky role she makes look effortless – a wise owl around Gary but a fledgling out in the world. There’s also a dawning sense of horror as Alana runs a gauntlet of toxic, complicated and predatory men. Together, the pair are both basically cosplaying as grown-ups in a world that can get intimidating in a heartbeat.

The other star is the setting: So often Hollywood shorthand for a low-rise prison where teenage dreams are crushed by dead-end jobs and mom and dad’s hardline stance on keg parties, here the Valley is bathed in bleached-out sunlight and bittersweet nostalgia. Licorice Pizza is not quite a love letter to the place – Alana’s orthodox Jewish family (all played by other members of the Haim family) aren’t exactly liberal-minded – but there’s huge fondness here for these low-rise burbs in LA’s shadows from a filmmaker who grew up amongst them.

Aided by Jonny Greenwood’s delicate score, Anderson paints an occasionally melancholy picture. But if it sounds heavy, it’s not. Not remotely. The feelgood needle drops come thick and fast (The Doors revival starts here), and every scene brings a new performance to relish and a fresh consignment of belly laughs. When, later, Licorice Pizza dips into the machinations of ‘70s Hollywood, the laughs are provided by Bradley Cooper’s apocalyptically coked-up movie exec Jon Peters and Sean Penn’s old Hollywood warhorse, modeled on rabble-rousing William Holden.

Both veterans threaten to steal the show from their younger co-stars, but Licorice Pizza is an unstealable movie. It just gallops along with a boundless energy that even the deranged Peters couldn’t match. Like Richard Linklater’s Dazed and Confused before it, PTA has made an American ’70s coming-of-age story that makes post-Vietnam America seem like a pretty awesome place to grow up.