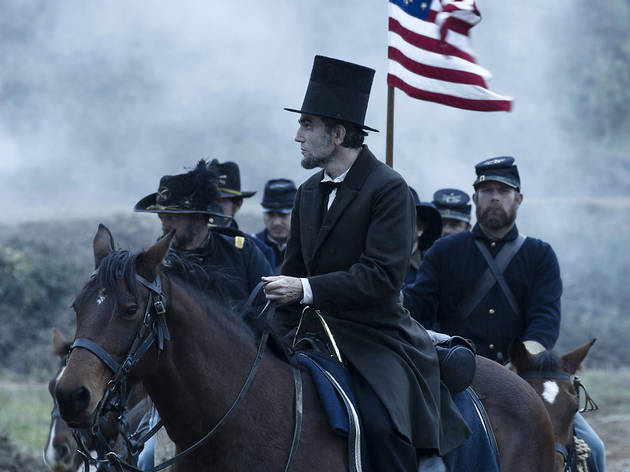 In Steven Spielberg’s 'Lincoln', Daniel Day-Lewis plays America’s favourite president, Honest Abe, as a benign, wise, ageing goat. He can bare his teeth, but prefers to chew doubters into submission, like he’s turning over an old can between well-worn teeth. He launches into gentle, storytelling monologues as if employing stealth weaponry: the young and green lap them up; the seasoned and weary roll their eyes, submitting to conversational death by a thousand anecdotes.

This is not a biopic in the usual, cot-to-coffin sense, even if that carved-in-granite title suggests otherwise. Instead, Spielberg and writer Tony Kushner (‘Munich’) – drawing on a book by historian Doris Kearns Goodwin – delight in the backroom wrangling and public rhetoric that in 1865 led to the 13th Amendment to the US constitution, outlawing slavery. This is Spielberg in the historical mode of 'Schindler’s List' and 'Saving Private Ryan' but with his more epic and populist wings intriguingly clipped by a story that mostly takes place over just a few weeks in January 1865.

Kushner’s script is a masterpiece of miniature portraiture. The film’s thrust is the countdown to a vote as Lincoln and his agents battle to find enough Republicans and Democrats to back the amendment while simultaneously keeping end-of-war negotiations on track. It also offers moving comment on Lincoln’s relations with his strong but nervous wife, Mary (Sally Field, below), and his sons (the eldest played by Joseph Gordon-Levitt), as well as throwing us into the heart of the frenzied horse trading and high-stakes talk of this critical moment in American history. (Among a vast ensemble of actors playing politicians, there are enough hairpieces and beards on display to stitch together giant wigs for all four heads on Mount Rushmore.)

Especially electric is the push and pull between Kushner’s talky, microscopic script – unafraid of politics, long scenes and four walls – and Spielberg’s attraction, in cahoots with cinematographer Janusz Kaminski, to quietly iconic moments: Lincoln’s famous beard silhouetted against the night or the faint shadow of soldiers riding past Ulysses S Grant (Jared Harris) and Lincoln as they chat on a porch. This doesn’t mean 'Lincoln' is entirely free of heavy-handed moments – an early encounter between Lincoln and some young soldiers verges on the corny and there’s some near-slapstick stuff involving spivvy lobbyists. But mostly Spielberg finds a happy balance between the sober and the stirring, and even John Williams’s score is relatively muted.

It’s down to Day-Lewis, taking Kushner’s many prompts and in Spielberg’s reverent glare, to give us a greater sense of the man beyond these few weeks. His Lincoln is flat-footed and heavy-ankled; he shuffles down the White House corridor as if he’s dragging chains behind him. His shoulders are drooping, his eyes are weary, but his mind is as sharp as a bayonet. His Lincoln is complex and endearing, never fully likeable but always hugely admirable, and because of these happy contradictions 'Lincoln' works as a snapshot of a great man without ever slipping into a portrait of sainthood.