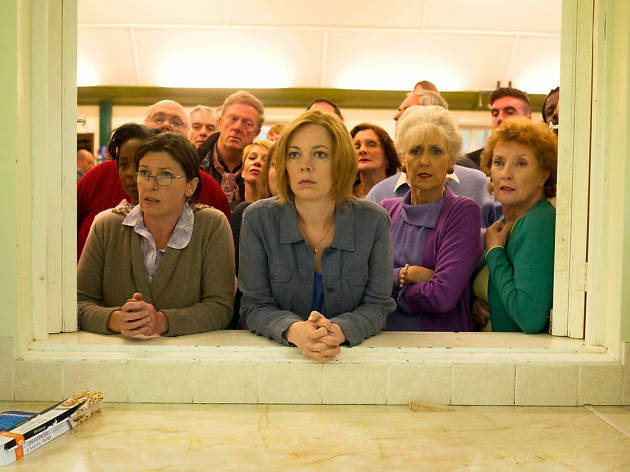 Like the tale of Sweeney Todd but told from the viewpoint of Todd’s curtain-twitching neighbours, the National Theatre’s 2011 musical ‘London Road’ sang its way through the real-life 2006 murders of five Ipswich prostitutes using the real words of the people who lived doors away from their killer. The show was a sparkling, unnerving example of verbatim theatre, and now stage director Rufus Norris has brought it to cinema for his second film after 2012’s ‘Broken’. It’s an exciting, unsettling experience blessed with imagination and compassion.

The strange artifice of ‘London Road’ invites a fresh look at old truths about prejudice, suspicion and, finally, solidarity. The weird brew that Norris and co have cooked up is giddily intoxicating: the songs rubbing up against the subject matter, the actors repeating words spoken in interviews to the show’s writer, Alecky Blythe, giving them a heightened, ‘reported’ feel. There are choreographed dances in dismal suburban locations, and a careful casting of faces that are at once ordinary and extraordinary.

A few well-known actors show up, including Olivia Colman, and there’s a small role for Tom Hardy as a deeply creepy cab driver singing into his rearview mirror. But it’s above all an ensemble piece, a portrait of a community broken and then healed, emphasised by the way colour slowly creeps into the film’s face.

‘London Road’ is unashamedly British in its focus on a hungry but faux-respectful media, on tittle-tattle, on the unspoken being spoken behind closed doors and on a late blooming of regretful hugs all round. The real delight, though, is the language. You literally couldn’t write this stuff, and songs like ‘Everyone Is Very Very Nervous’ and ‘It Could Be Him’ are uncomfortable earworms composed of platitudes and throwaway comments you could easily have overheard on the bus.

As a story, it honours the tragedy it’s based on. But it does much more by holding up a mirror and, more importantly, a microphone to the nation we are and the one we become at times of crisis and panic. It’s enthralling and haunting.