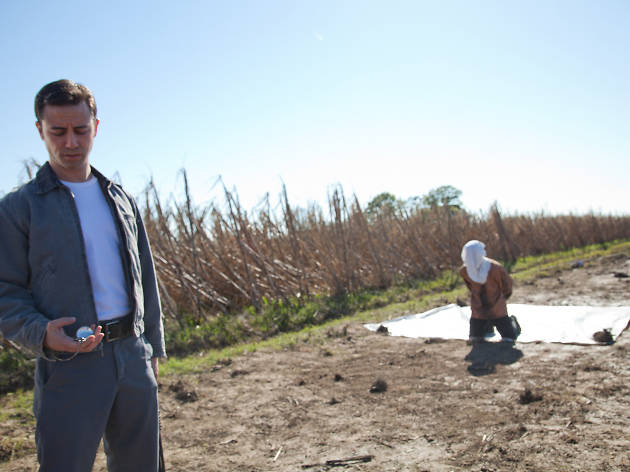 4 out of 5 stars
The first thing you notice is Joseph Gordon-Levitt’s face. Has the star of ‘Inception’ lost a fight with an orbital sander? His nose is oddly flat, his forehead unnaturally smooth. It’s distracting – which is a problem, because ‘Looper’ offers the kind of head-bending sci-fi that you don’t want to be distracted from. Look away, and you’ll miss something important.

The face is intentional, of course: like a futuristic take on the surgerised celebrity lookalikes in ‘LA Confidential’, Gordon-Levitt has had a digital facelift to make him resemble Bruce Willis. In fact his character, gangland assassin Joe, is destined to become Willis, drop back through a portal in time and confront his ‘current’ self. Confused? If you pay attention, you won’t be.

The plot of writer-director Rian Johnson’s third feature is far too convoluted to explain: let’s just say it involves time travel, organised crime, future terrorism, death, loss, hope, regret and genetic mutation. But it’s to Johnson’s credit that, for the attentive viewer, none of these frantic plot contortions ever becomes bewildering: ‘Looper’ lays out a wealth of clever, intriguing concepts lucidly and with precision.

Not that any of these ideas is particularly new. Both the time-travel structure and a late-arriving, even more compelling subplot involving Emily Blunt as an isolated woman with a unique child are familiar from decades of sci-fi, notably ‘The Terminator’, ‘Twelve Monkeys’ and Jerome Bixby’s wonderful 1953 short story ‘It’s a Good Life’ (memorably adapted for ‘The Twilight Zone’).

But, as with his 2005 debut ‘Brick’, it’s how Johnson organises these elements that makes ‘Looper’ special. Nothing is predictable or comfortable: both the beautifully designed world of Kansas City 2042 and the characters who inhabit it feel entirely real, but also consistently surprising and often disconcerting. As the older version of Joe, brutalised by grief and self-hatred, Willis has never played such an unsympathetic role: although both Gordon-Levitt and Blunt give strong performances, it’s Willis you’ll remember. With this and ‘Moonrise Kingdom’, he’s on a roll.

‘Looper’ isn’t the super-smart sci-fi masterpiece many had hoped for: logically, it doesn’t quite add up, and there are slow spells. But if Johnson’s main aim was to strike a balance between conceptual cleverness and multiplex thrills, he could hardly have done better. This is a hugely satisfying, enjoyable and thoughtful movie.