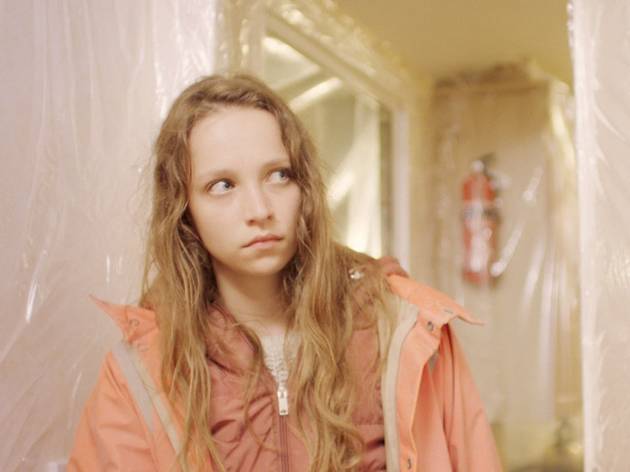 One of the best British films of the year, this dark-edged seaside tale box casts a deeply hypnotic spell

Dark and brooding, set in a ghostly off-season Cornish holiday park that makes the The Shining’s Overlook Hotel look a canny choice of vacation spot, this magnificently unsettling British debut is a serious calling card for writer-director Claire Oakley. It’s one of those the-less-you-know-the-better movies; suffice to say that appearances here are deliciously deceiving: it looks like a horror film, feels like a horror film and even, thanks to its eerie seaswept sound design, sounds like one. But for all the clammy grip it exerts, this thrillingly original film is more interested in trapping you in its psychosexual maze and immersing you in the relatable pains of self-discovery.

It opens, strikingly, with two headlights piercing the darkness. It’s a minicab transporting 18-year-old Ruth (Molly Windsor) on the last leg of her 14-hour journey from her parents’ home in Derby to the beachside caravan park where her boyfriend Tom (Joseph Quinn) works. Her excitement is palpable as she introduces herself to the park’s manager, Shirley (Lisa Palfrey, an absolute treat in all her scenes).

Boasting an energy best described as ‘funny-peculiar’, Shirley’s grudging welcome is an early sign that this isn’t a place that will clasp Ruth to its bosom in a hurry. Even Tom, showing all the symptoms of bad boyfriend-itis, seems distracted, bored or worse. Only Jade (Stefanie Martini), a free spirit who makes wigs and has something of a reputation around the park, offers friendship, doing Ruth’s nails and sharing spliffs with her. Then Ruth spots red lipstick marks on Tom’s mirror and begins to find mysterious red hairs, and she’s soon following the strands into a labyrinth that exists at least partly in her mind.

Rather than outright shocks, Make Up is a film of haunting visuals (cinematographer Nick Cooke captures one beachside party with the reddish glow of a pagan ritual) and eerie atmospherics that settle over you like an Atlantic fog. Like the deserted Venice of Don’t Look Now, a potential touch point here, the half-abandoned holiday park makes a perfect setting for its many mysteries to unfold (or not – not everything here is neatly resolved). Nocturnal stillness is pierced by the screams of mating foxes, ready-to-be-fumigated caravans are entombed in plastic sheeting, and a half-glimpsed figure in a red wig haunts Ruth as she navigates the eerie shower blocks and arcades.

If not quite a red herring, that oppressive mood is only part of what leaves this film lingering long in the mind. Oakley’s true goal is to tell a story of rebirth – of the savage discomfort and illicit thrill that come with shedding your skin and gaining another, and of how inner turmoil can make the world seem like a more hostile place. In this, she has the perfect accomplice in Windsor. Her subtle, sensitive performance charts a young woman discovering that fear and freedom sometimes go hand in hand.

In UK cinemas and on Curzon Home Cinema from Fri Jul 31.