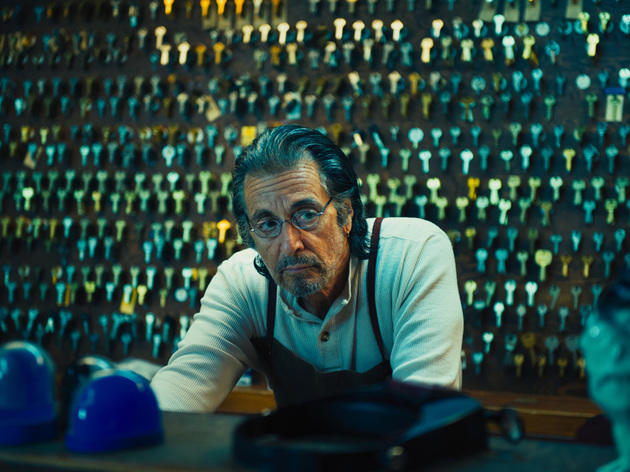 Al Pacino reins in his shouty excesses in this simple, slightly underwhelming indie about a lonely Texas locksmith

A few years ago Al Pacino told an interviewer that the director’s job is to rein him in. So well done director David Gordon Green ('Joe', 'George Washington') for curbing his weakness for thespy overacting. Pacino gives his most natural performance in years in 'Manglehorn', the smalltown story of a man facing up to a lifetime of failed relationships. If only the director had put the brakes on the sentimentality of the script by newcomer Paul Logan then Pacino would be in business.

Pacino is Manglehorn, a locksmith (because his heart is fastened shut, geddit?), divorced and barely in contact with his son. Manglehorn is a bit of a character in his Texas town, but underneath the old dude exterior, he's seething with anger and disappointment. Pacino inhabits this guy Manglehorn right down to the blackened nubs of his fingernails that suggest he really has worked with metals and grease for 45 years. Manglehorn might not be good with people, but he loves his cat, a fluffy ball of white fur called Fanny. For an actor who built his career playing hard men, it’s a treat watching Pacino on his hands and knees putting on a baby voice.

The acting is all round outstanding. Holly Hunter is more than a match for Pacino as Dawn, who works in the local bank. Dawn and Manglehorn have a long-running flirtation. Mainly they talk about their pets. Dawn naively thinks Manglehorn’s devotion to his cat is evidence that he’s a caring man. In an acting masterclass, she bravely opens her heart one night at dinner, only for him to throw it back in her face. Manglehorn also goads his son, a mega-rich investment broker played by Chris Messina, while the comic role of a bullshitting, motor-mouthed pimp is taken by Harmony Korine.

The real love of Manglehorn’s life (as well as the cat) is Clara, an ex-girlfriend he’s been writing to for 40-odd years with no reply. It’s a hokey, unconvincing storyline in a film that loves nothing more than to batter its audience over the head with a cliché. Still, there are some moments of real tenderness and grace. A vet giving a commentary to a trainee as he operates on Manglehorn’s cat is unexpectedly moving. A man walks into a bank and serenades a woman (his wife?) with a declaration of love as Manglehorn looks on, embarrassed. And at the centre of it is Pacino, totally authentic among non-actors in this rough-around-the-edges world of beaten-up bars and restaurants with crappy plastic furniture. Now, someone give the man a more decent film than this.