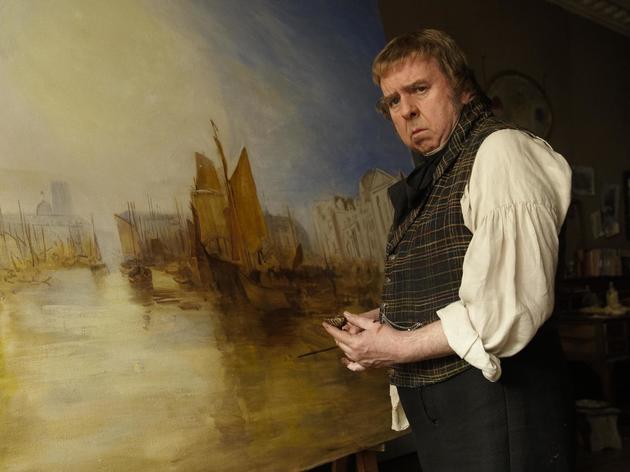 Twice before, first with 'Topsy-Turvy' and then with 'Vera Drake', Mike Leigh has punctuated his bittersweet studies of contemporary life with period dramas. Now, with 'Mr Turner', the British director of 'Naked' and 'Secrets and Lies' takes us back to the nineteenth century and the later years of the celebrated, groundbreaking, difficult painter JMW Turner (1775-1851). Sad and joyful, 'Mr Turner' offers a wonderfully rich tapestry of experience and digs deeply into a complicated, contradictory life.

Timothy Spall – a veteran of Leigh's films – plays this eccentric, determined London bohemian like a bronchial, cantankerous, randy old toad with backache. He grunts and grimaces and gropes his way through life. He talks like a market trader after a crash course in the classics. Leigh, meanwhile, explores Turner's life unburdened by any sense of purpose other than an intense, contagious fascination with this man, his work, his times and, increasingly, the inevitable, slow, irresistible trudge towards death.

We observe Turner's fondness for his elderly father; his sexual relationship with his meek housekeeper (Dorothy Atkinson); his rejection of his children and their mother; his arms-length acceptance by the lions of the Royal Academy; his late-life relationship with a Margate widow (Marion Bailey); and the mockery of the crowd when his work turns experimental. 'Vile' and a 'yellow mess' concludes Queen Victoria at an exhibition: the presence of royalty in a Mike Leigh film is just one of its many welcome surprises here. Mortality hangs heavily over ‘Mr Turner’, which covers roughly 25 years and is a poetic, brilliantly choreographed patchwork of moments and episodes. The film often has a wistful, regretful air, but alongside sadness sits great joy – there are moments of wicked humour.

All of this is engrossing and evocative, and the sense of time, place and period is unusual and beguiling. But what makes 'Mr Turner' doubly fascinating is the mystery at its heart: what defines an artist's relationship with his or her subject? Can it be explained? Can you trace clear lines between the creator and the work? They're impossible questions. So what Leigh does is sketch the emotional ties between Turner and the places (and less frequently the people) he paints. He bursts into tears while sketching a young prostitute. He ties himself to the mast of a ship in the rain. He strides across a hilltop ruin as five wild horses gallop past.

Our sense of what inspires Turner as an artist comes less from watching him work (the film is pleasingly light on literal scenes of the artist at his easel) than from a series of astonishing, time-stopping shots of land and sea. The film's opening sees two women walking along a canal in the Low Countries. Later, we see waves lapping against a beach and cliffs. Leigh and his cinematographer Dick Pope essentially create a series of filmed paintings that celebrate the spirit of Turner's work, and these reflective, quiet moments have great power.

'Mr Turner' is a long-cherished project for Leigh. It's impossible not to equate the ideas in the film about working and living as an artist as reflections on the filmmaker's existence – finding time for a personal and family life; negotiating patronage; feeling strongly about the work of contemporaries; tolerating critics intellectualising your work. But if Leigh is in some ways holding up a mirror to himself, that doesn't distract from the larger mirror he holds up to Turner and his time.

Not only do we end up with a vivid, surprising and soulful sense of one artist and his work, but Leigh also offers us a commanding view of a city, London, and country at the dawn of the modern age and of a man being overawed and overtaken by new technologies such as photography and the railways. As ever with Leigh, 'Mr Turner' addresses the big questions with small moments. It's an extraordinary film, all at once strange, entertaining, thoughtful and exciting.