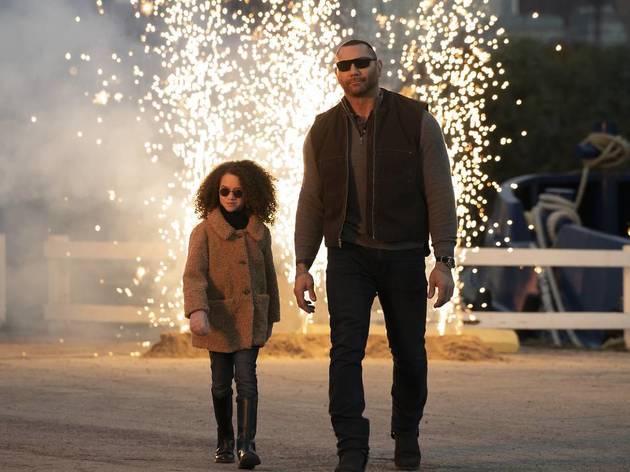 That age-old Hollywood tradition of teaming up an action star with a small child (‘Cop and a Half’, ‘The Pacifier’, 'Kindergarten Cop', etc) lurches back into derivative life in ‘My Spy’. Here, the action hero is Dave Bautista, who plays an impossibly beefy CIA agent known only as JJ. Surveilling the home of a nine-year-old and her single mother, the superspy’s stakeout is compromised when precocious Sophie (Chloe Coleman) walks in on her new CIA neighbours. A couple of plot contrivances later and JJ has taken on the role of gruff, surrogate father. This mildly amusing but overly familiar setup is further undercut by a movie that never settles on what it wants to be.

Bautista has a real talent for killer line readings, and he delivers some of the ‘Guardians of the Galaxy’ movies’ biggest laughs with his deadpan guilelessness. So the slapstick-orientated comedy of ‘My Spy’ feels like a waste of both Bautista’s comic timing and his stocky, brick-wall frame. Some children may get a laugh from watching a behemoth do the whip and nae nae, but it looks embarrassingly unnatural, and ice-skating pratfalls are an overly obvious way to draw chuckles. His unsmiling face and imposing physique also makes Sophie’s early warmth towards JJ puzzling, at best.

Of course, this dilemma could be solved by good jokes. Alas, ‘My Spy’ has close to none. During a montage in which JJ agrees to give Sophie espionage lessons, there is only one gag, about walking away from explosions, that fully lands. Aside from that, most jokes miss the mark. Ken Jeong appears as JJ’s scolding boss and Kristen Schaal is wasted as JJ’s adoring techie sidekick. Stuck in a film that can’t commit to exactly who its characters are, Bautista and the cast struggle to carve out believable performances. It’s a half-hearted riff on a familiar subgenre that never brings any fully formed ideas of its own.