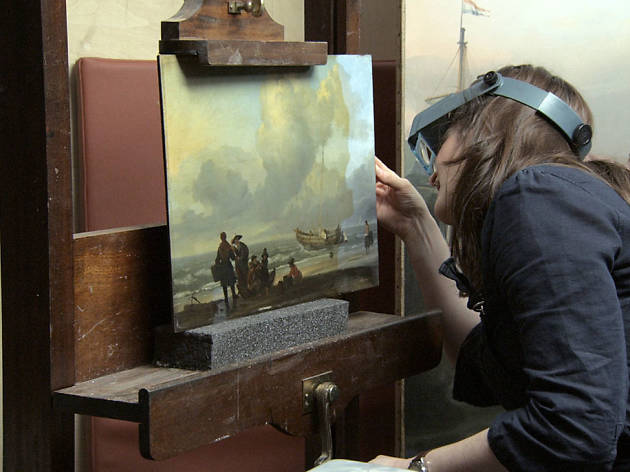 For his latest exploration of an institution, the great American documentary-maker Frederick Wiseman, now in his mid-eighties, turns his inquisitive lens on the employees, patrons and paintings of London’s National Gallery. Time-wise it’s a mid-range production for him: a few minutes short of three hours, it's longer than his cut-to-the-quick features like 'High School' (1968) and 'Boxing Gym' (2010), yet shorter than such epic-sprawl tapestries as four-hour-pluses 'Belfast, Maine' (1999) and 'At Berkeley' (2013). Stylistically, it keeps with Wiseman’s preference for showing, not telling. No explanatory titles. No talking-head interviews. Just of-the-moment action, observing as the viewing public wanders about the galleries and the museum staff – restorers, tour guides, executives – go about their business.

Thematically, however, this is among Wiseman’s densest, and best, works – one that, after a profoundly emotional start, becomes a much stranger, slippery beast. Its greatness sneaks up on you. The film begins with several heady and moving odes to the viewing public: a museum guide explains to an attentive audience how a middle-age church mural might have seemed alive to its spectators in the dimness of candlelight. A curator discusses with gallery director Nicholas Penny the need to make the various exhibitions – beyond a sure thing like Leonardo Da Vinci – more accessible and inviting to the general populace. In the most poignant scene (one that a lesser movie would make the tear-jerking finale), a group of blind people study Camille Pissarro’s painting 'The Boulevard Montmartre at Night' (1897) with the aid of braille-like copies and the encouraging words of an advisor who clearly believes anyone, regardless of handicap, can experience a work of art.

Yet Wiseman doesn't do soppy. As 'National Gallery' goes on, the topics become more dry and more distant, with lengthy, often technical episodes on restoration and the like. You may initially find yourself wishing for the emotional pull of the film’s earlier sections, but it’s all to an increasingly intriguing point. As the public becomes less of a focus and the inner workings of the museum take precedence, a fascinating debate emerges about the elitist nature of the institution and, indeed, of many of the pieces in its collection.

It's striking how often these portraits and murals were commissions designed to be displayed in a single venue – far away from the people's eyes – or heavily coded private jests between their creators and an extremely exclusive following. The popular view of art is that it belongs to the masses. Wiseman casts a more sceptical eye, questioning such idealism with cold, hard historical context. Yet he also admits that these works live on far beyond their original purpose, even if, as the film’s bold, brilliant climax suggests, they may eventually play to an audience of none.​