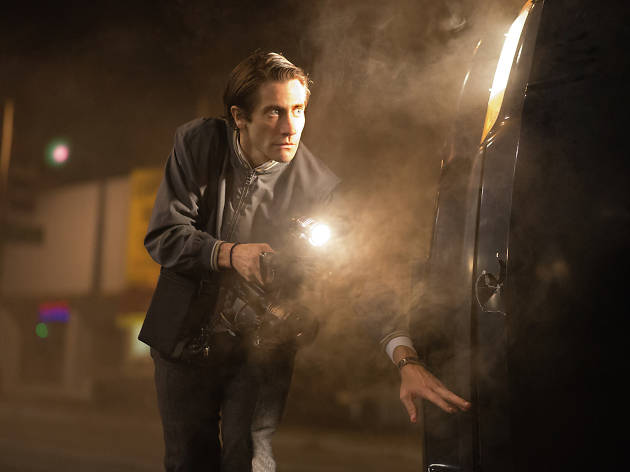 It's no news to anyone who's ever watched American TV – especially local crime coverage – that the beat has devolved into a cesspool of gore, jittery witnesses and 'hot content'. What was once prophetic in movies like 'Network' and 'Broadcast News' is now commonplace. Writer-director Dan Gilroy's supercharged 'Nightcrawler', a viciously funny film, starts from that premise and wisely avoids making the same points. Instead, it twins the frenetic, sleazy hunt for shocking footage with the career ambitions of a closet psycho who, naturally, rises to the top. Closer in spirit to the media-amplified perversity of Martin Scorsese's 'Taxi Driver' and 'The King of Comedy', 'Nightcrawler' feels like a major portrait of a sick, insatiable appetite.

The hungry wolf at the centre is Louis, impressively played by a wire-thin Jake Gyllenhaal, who right off the bat doesn't feel like your everyday LA loner. Bug-eyed, upbeat and frustrated by his nighttime excursions fencing stolen goods, he strolls up to a burning car on the highway, the rescue in progress. Watching the swarming cameramen (freelancers who provide smut to TV stations for quick payouts), a light bulb goes off over Louis' head. Soon enough, he's out there with his own camera, getting closer than anyone – he nearly runs over a crime scene with his car – and sneaking through bullet-strewn homes without permission.

Initially, 'Nightcrawler' plays like a darkly comic how-I-made-it story. Louis marshals an impressive (if slightly cracked) discipline to his new passion. He fancies himself a budding businessman: after a ridiculous interview, he takes on a desperate assistant, Rick (Riz Ahmed), for an unpaid 'internship' to watch over his wheels while he shoots, and sells a few clips to a crass news director (Rene Russo, great in a tricky role). But the film takes a brilliant turn into the unexpected when Louis finds himself the first person at a car wreck, even before the police. The corpse could be better positioned to catch the light – so he moves it. From there, the bottom drops out and the film plunges into ethical freefall, as entertaining as it is nauseating.

Gyllenhaal, who summons career-best work, simply couldn't have played this character a few years ago. His boyish handsomeness undergoes a transformation into ferrety slickness, the actor hammering home Louis's mania in ferocious, near-OCD monologues that reveal a truly dangerous operator. And thank heavens for a film without the urge to supply a backstory. Gilroy, vastly supported by cinematographer and Los Angeles specialist Robert Elswit ('Boogie Nights', 'Magnolia'), directs with the verve of a seasoned pro, even though 'Nightcrawler' is his debut. 'Why aren't we at the rape in Vincent Park like everyone else?' whines Rick, his boss steering them to a different score beyond their wildest dreams. It's a movie in which those dreams have happy endings for the wrong people.