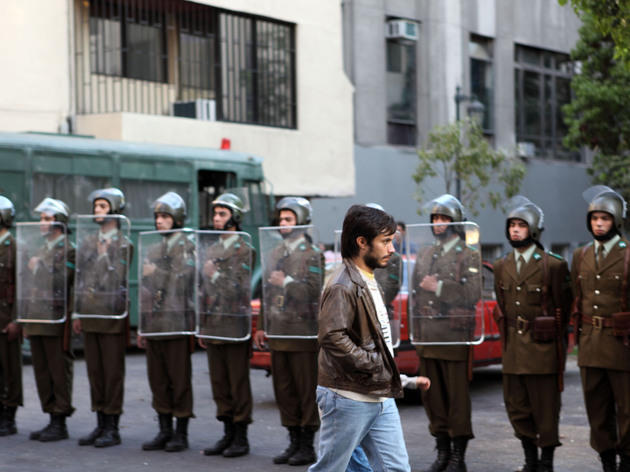 It’s an unspeakably good time to be a political cynic at the movies. The opposite of earnest, Lincoln vibrates with sneaky guile—here’s how your 13th Amendment sausage gets made. Zero Dark Thirty shows off the grotty side of justice (too much so for some), while Argo plods toward its Oscar coronation, every day more of a sure thing because Hollywood loves its real subject: salesmanship.

But if enough people see No, a Chilean election drama with snap, the film will claim a place among these peers, even as their superior. That’s how electric and funny it is. The moment is 1988, when Augusto Pinochet, yielding to the worst advice ever given a despot, chose to put his 15-year rule up for public referendum. Vote “yes,” and it would be business (and beatings) as usual. Vote “no,” and it was hard to say what would happen to you.

This battle actually happened on TV, where the two opposing sides were guaranteed a nightly allotment of 15 minutes of national airtime. No is shot entirely in the smeary syntax of neon-lit commercials (an ancient 1983 video camera was unearthed by the crew), and though its ugliness takes getting used to, this is the first of director Pablo Larraín’s sly choices. Could a bloodless revolution arrive under the cloak of a synth-scored soda ad with a mime in it? Or maybe, as the movie’s look implies, we’re already living in that mime’s world.

René (Gael García Bernal), our hero, hopes so. He’s the sneaker-clad wunderkind who sells “Free” Cola—a wealthy, floppy-haired creative. Comparisons to Don Draper spring to mind, but upon inspection, this guy is less adman than ad-manchild. Separated from his lefty wife, René stays up late playing with toy trains; he stares with his young son at their microwave, more fun to watch than the newscast. Does he care about the vote? Not much. He lives to pitch. His pro-Pinochet boss (Alfredo Castro, smooth as silk) mocks him for an initial consultation with Team No. Perhaps it’s a dare, a throwdown.

Game on: René starts with rainbow logos and jingles. Old-timers chafe as he considers democracy for a “concept,” then rejects it for the more salable notion of happiness. The idea of an overgrown skateboarder waging televisual war against fascists is too good to be true—and, indeed, isn’t. (The character is a composite of two No staffers, both of whom have cameos as bad guys.) Yet the essential thrust here is both knowing and undeniable: No is pitched at the pivot point when the image makers were brazen enough to push ideology to the side. Considering how high the stakes were, it’s amazing they almost didn’t get the gig.

Gael García Bernal has been on fire lately (recently in The Loneliest Planet), as his boyish looks bloom into immaturity. The work he does in No is cryptic and arresting: Either René is a blinking naif or shrewder than everyone onscreen. His detachment is his strength. For those not up on Chilean history, I’ll leave the movie’s outcome unstated. We last see René back in the office, showing off his latest TV media event starring sexy models. Has he changed? Deliciously, it’s not a yes or no question.