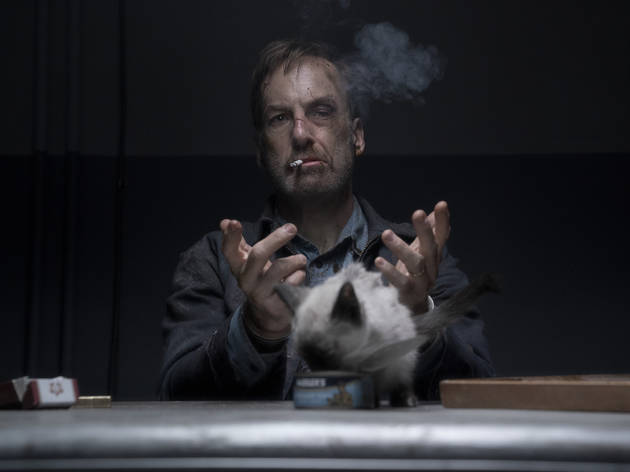 Breaking Bad’s scene-stealing Bob Odenkirk scored his own spin-off in the critically acclaimed Better Call Saul. But with that show coming to an end with next year’s sixth and final season, you can’t blame him for looking to the future. It seems like he’s settling for unseating Liam Neeson in the hilariously unlikely action hero stakes.

Nobody opens with promise. Odenkirk’s mild-mannered dad Hutch sits bruised and battered in an interrogation room in front of two bemused detectives. He proceeds to pull both a tin of cat food and a ridiculously cute kitten out of his bloodied denim jacket. ‘Who is this guy?’ the cops wonder aloud. His answer gives the film its name.

Adoring young daughter Abby (Paisley Cadorath) is still totally Team Dad, and her wish for a cat is the smoking Chekhov’s gun here. Well, that and all the other actual smoking guns, and knives, and assorted household utensils that he uses to grievously abuse the Russian gangsters who, after an unfortunate run in on a bus, wind up coming for his family.

Directed by Ilya Naishuller (Hardcore Henry), Nobody is a big old nothingburger. It has none of the balletic poise of Wick’s bombastic fight sequences, nor the droll humour that undercut those movies. It’s a real slog. Odenkirk’s inarguable charm just seems wildly misplaced. At least Neeson pulled off the angry dad mode. This film is just angry, a deadening thud of pointless nihilism that actually seems to celebrate saving a marriage through mass murder.

Nobody takes all the wrong lessons from Tarantino too, dropping a snoozy series of old-timey music cues until it finally hits on the genius idea of deploying Pat Benatar. Only because there’s not a brainwave to be had here, even that gets flub. Instead of nailing the plot beats with ‘Hit Me With Your Best Shot’, we get ‘Heartbreaker’ instead. Which about sums it up.

Out in US and Australian cinemas now. In UK cinemas Jun 9.