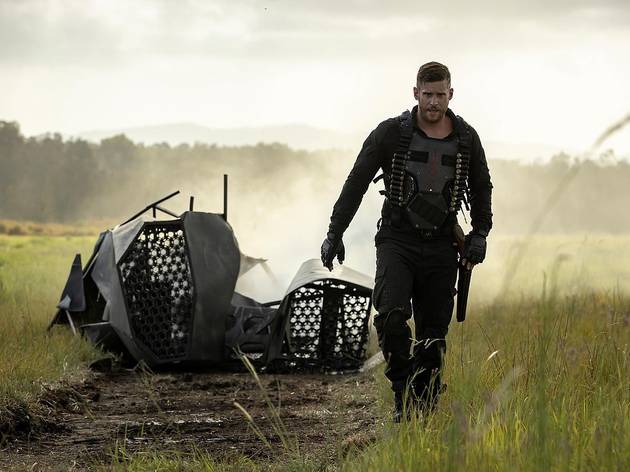 Alien invasion hasn’t been this apocalyptically hokey since Will Smith squared off against the tentacled hordes of Independence Day. In Occupation: Rainfall – too bad the title Australia Day was taken – the land down under is two years into a struggle against the colonising ‘Greys’. Vast warships hover over Sydney Harbour, the famous bridge is a smouldering ruin and the once-sunny CBD is shrouded in a permanent night (Parramatta’s prospects as an alternative city centre are looking better and better).

Desperate bands of good-looking freedom fighters such as Matt Simmons (Dan Ewing) battle squads of invaders who hide their scaly faces behind campy battle armour. Word comes of a mysterious plot device known as ‘Rainfall’ that has something to do with the former US military base at Pine Gap, and Simmons is dispatched along with inscrutable good-guy extra-terrestrial Garry (Lawrence Makaore) and plucky stowaway Marcus (Trystan Go) to find out what help it could possibly be against the alien threat. And when that turns out to involve The Hangover’s Ken Jeong as the beerily-named Bud Miller and his pop-culture obsessed alien buddy Steve (voiced by Harry Potter’s Jason Isaacs), all pretence at seriousness is banished, and it’s time to put your feet up on the seat in front of you and try not to spill your popcorn.

Writer-director Luke Sparke is something of a miracle worker. Filmed on the Gold Coast, his $30 million movie looks and sounds like it cost four times that, with rip-roaring action and special effects that dwarf any independently produced feature made in Australia since, well, his previous one in this series – Occupation from 2018. That film made barely a blip on the local box office, but thanks in part to the shortage of major Hollywood fare in 2021, the sequel is getting a massive PR campaign and a release on 175 local screens. Sparke, who also edited the film, seems to have been raised on a breakfast cereal called Blockbuster Tropes – there’s barely a scene here that doesn’t come across like a retread of something from Star Wars, Lord of the Rings, Michael Bay, James Cameron or Marvel. And despite a brazen lack of originality, it’s also a movie that is disturbingly resonant for our times, with a subtext for every trauma Australia is currently facing.

Rainfall? We wish: the film's portrayal of a smoke-choked Sydney brings back the nightmare of the Black Summer. Its main plotline of an Antipodean invasion can’t help but resonate in a week when the campaign to Change the Date has never been more heated (Indigenous actor Mark Coles Smith has a major role as one of the key freedom fighters). There’s even a racism/refugee subplot: hundreds of benign aliens have flooded into town seeking asylum, and it’s the rare human like Amelia (Jet Tranter) who has the heart to help them out. (Keep an eye out for Temuera Morrison’s Atticus Finch moment, up against Vince Colosimo’s would-be alien lyncher.) And even though the film involves the evacuation of Sydney for a vast facility hidden under one of the Blue Mountains, we’re told that the country has gotten off lightly compared to the northern hemisphere. Yes – whether by sheer coincidence or not, it’s a Covid film through and through. Sometimes even cheesy movies can be a perfect distillation of the zeitgeist.