Of Fish and Foe 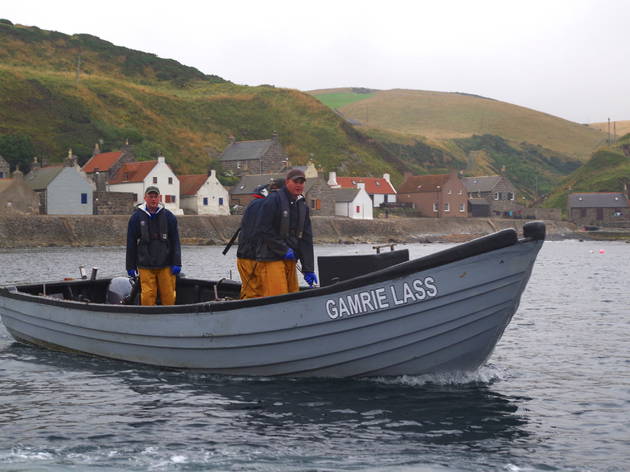 Two implacable sides face off in this enthralling, no-punches-pulled doc about the Scottish fishing industry.

The last days of the controversial practice of salmon netting – catching wild fish at sea as they make their way back to their spawning grounds – form the background to this documentary. It’s fascinating, frustrating and often brutal. Sparkling fish – fresh from the ocean – are bashed on the head, rare seabirds get entangled in nets, seals are shot with hunting rifles and there are allegations of homophobic abuse. VisitScotland.com must be cock-a-hoop.

The Pullars are the last family still salmon netting. They hate seals for stealing their catch and chewing holes in their nets. By law, they are allowed to shoot a quota of them. But shooting cute animals – even legally – is a tourism PR disaster, and a major weapon that environmental activists Sea Shepherd can deploy on social media. As the two sides face off, each videoing the other, ‘Of Fish and Foe’ takes on a surreal quality, like one of those Peter Greenaway films that seem to have some underlying but completely arbitrary structure. On top of this, the fishermen accuse the authorities of getting into bed with the activists in order to demonise their way of life, as well as protect the lucrative posho pastime of river angling.

Initially, it’s hard to have much sympathy for the fishermen. With their satellite tide forecasts, sensitivity to Twitter and fondness for pettifogging legalese idiocy (‘I own the lease on this rock’; ‘You touched my rifle – that’s assault’), their invocation of Scottish ‘heritage’ seems merely cynical. But Sea Shepherd doesn’t emerge that well either, provoking the fishermen into abusive confrontations, dragging them into court and priggishly saying ‘no comment’ when asked directly about stuff they happily plaster across Facebook. As salmon netting is finally banned, the Pullars seem justifiably aggrieved that their livelihood has been sacrificed on the altar of tourism. Clearly, there is a very particular vision of what fishing (and Bonnie Scotland) should look like, and the working-class Pullars aren’t part of it.

As yet another GoPro-documented stand-off occurs amid the sublime Scottish landscape, you’re forced to wonder if any of this is about the environment or animals – or anything really, apart from man’s capacity to exploit nature to pursue his own agenda of hating his fellow man.