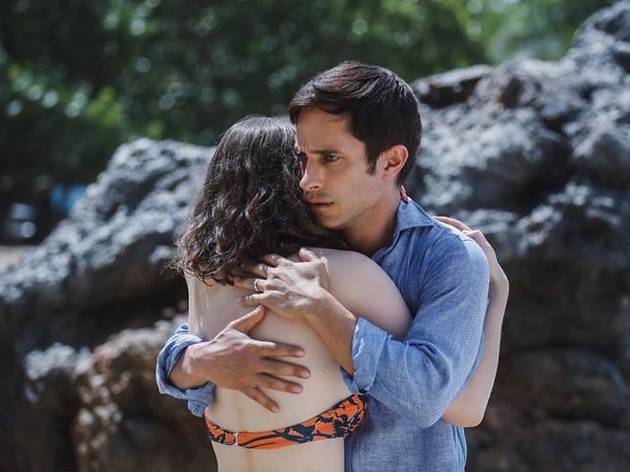 When The Sixth Sense dropped its doozy of a plot twist, it was a pop cultural momen​t to rival​ Luke Skywalker’s paternity reveal. ​The movie scored six Oscar nominations and catapulted ​M Night Shyamalan into the big league. Unbreakable followed, once again tapping lead actor Bruce Willis for an interesting spin on superpowers. Then came ​underrated ​alien invasion film Signs​ and all seemed set fair for a prodigiously successful filmmaking career, despite that hokey finale.

But while​ Shyamalan​ has delivered​ more hokey​ twists​, ​he's never quite managed to re-bottle that lightning​ – and he definitely doesn't manage it with Old​. ​It's another effort that seems to be reverse-engineered from ​its twist backwards, rather than built from the ground up.

​Adapted by Shyamalan from the graphic novel Sandcastle by Pierre-Oscar Lévy and Frederick Peeters​, it stars​ ​Gael García Bernal and Vicky Krieps as a feuding couple on the verge of divorce.​ ​Faking it for one final family holiday, they’ve taken their young daughter Maddox and her little brother Trent to a resort in a tropical paradise.

Hardly have they unpacked before they’re whisked off to a remote beach on a hot tip. Here they meet fellow holidaymakers including The Underground Railroad star Aaron Pierre’s rapper Mid-Sized Sedan, Rufus Sewell’s cranky doctor Charles​,​ and Australian actor Abbey Lee as his diet-conscious wife Chrystal.

If you’ve watched the trailer, you’ll have clicked that, not too dissimilar to Lost, there’s some strange timey​-​wimey stuff going on​ – a race to escape before rapid ageing gets the better of them all. Hence a too-short appearance from Jojo Rabbit star Thomasin McKenzie as a teenaged Maddox.

Shyamalan has never excelled at dialogue, but the mangling here is gobsmacking. Particularly when we’re expected to swallow a six​-​year​-​old discussing mortgages, or Sewel’s risible response to the death of a dog​:​ ‘It was only just alive.’ What little plot there is spelled out by the actors, as if they’ve been asked to slowly read aloud the scene directions between their lines.

This is exacerbated by the oddly mannered performances the director appears to court. Krieps, so excellent in Phantom Thread, is the hardest done by, struggling to wrangle much from the driftwood. Lee, at least, leans into ​the ​silliness​, whil​e​ also delivering the film’s ​one genuinely macabre moment. Mercifully, Shyamalan’​s​ trademark cameo is ​a ​short​ one​.

​It's not quite as ham-fisted as The Happening, ​but then it lacks ​that film’​s sense of scale. Here the action is so contained that it relies on character work that​'​s simply not there. Props to cinematographer Mike Gioulakis who picks up the slack with woozy camera angles that at least eke a little discombobulation from the lush location. And as for the big reveal? It's all so clearly signposted as to be anticlimactic. Despite Old's short run time, you can​'​t help but agree when we're told that one hour on the beach equates to two years off your life.

Old is in Australian cinemas now. Out in UK and US cinemas Jul 23.