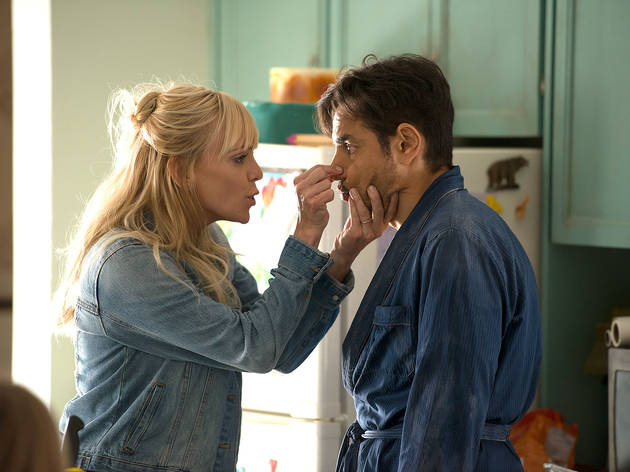 A zany '80s comedy is revisited with genders swapped, but less-than-revelatory results.

Blame our guilty affection for Gary Marshall’s 1987 fish-out-of-water rom-com ‘Overboard’ on the irresistible chemistry between Goldie Hawn and Kurt Russell – a fizzy byplay that made the Stockholm syndrome elements go down easier. Director Rob Greenberg’s dutifully gender-swapped remake forgets to recreate that buzz, while attempting to infuse the basic premise with female agency. Co-scripted by Greenberg and Bob Fisher from a new story by the original movie’s screenwriter, Leslie Dixon, today's ‘Overboard’ has some pleasant appeal, a few shout-outs to Marshall’s version and a refreshingly diverse cast (the movie’s finest quality) led by Anna Faris and ‘How to Be a Latin Lover’s Eugenio Derbez. But it also demonstrates that playing around with gender roles does not automatically equal a contemporary upgrade.

The main beats of Dixon’s 1987 plot are kept intact: Kate (Faris, amiably cunning) is an overburdened Oregon mother of three, juggling two demanding jobs and studying for her nursing exam. Humiliated and stiffed on a yacht-cleaning job by the hard-partying Mexican heir Leonardo Montenegro (Derbez, a likable blend of naiveté and flirty confidence), Kate, as revenge, claims to be his wife after he falls overboard and loses his memory. Away from his wealthy family and power-hungry sister, the unsuspecting Leonardo believes that he is Kate’s husband, stepping into the manly shoes of blue-collar ‘Leo’, doing her chores and earning the respect of her well-mannered daughters. Surely, the two will fall in love, right?

Ultimately pointless, ‘Overboard’ makes you wonder why it exists at all when it offers neither a fresh angle into modern-day relationships nor an improvement upon its predecessor. When the writing doesn’t fall prey to casual sexism (one character mourns the decaying physique of his once-hot wife, another offhandedly ridicules a female nurse’s looks), Greenberg’s film unwittingly suggests that a single mother can’t do it alone without the help of a sturdy father figure. It’s an unwelcome insinuation by a bland film that, even with Faris at the tiller, somehow finds a way to run aground.