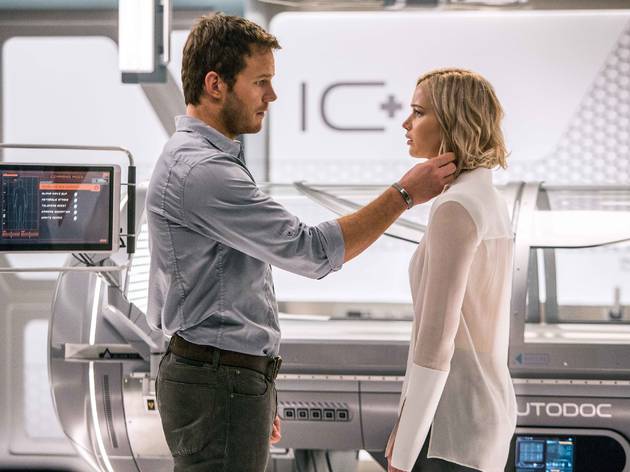 This interstellar sci-fi misfire dreams up one of the most intriguing ‘what would you do?’ scenarios in recent movie memory – and takes it precisely nowhere. The setup is essentially ‘Red Dwarf’ meets ‘Robinson Crusoe’, as cryogenically frozen interplanetary colonist James (a bland Chris Pratt) is accidentally awoken 90 years too early by a computer malfunction, and is unable to re-enter his sleep pod. After a brief spot of cabin fever and a lot of lonely chats with barman-bot Michael Sheen, James starts to realise that he can’t survive out here alone. But if he reanimates a companion, won’t he essentially be stealing that person's life?

You can probably guess what happens next, given that Jennifer Lawrence is all over the trailer. She’s Aurora, an author dedicated to documenting humanity’s great exodus to the stars – but her chance of doing so has now been cruelly snatched away. She’s stuck in a giant, drifting hypermall-cum-hotel, centuries from help, with a man she barely knows.

It’s in the scenes following Aurora’s emergence from cryo-sleep that ‘Passengers’ is most promising, the ramifications of James’s actions offering up all kinds of fascinating dramatic opportunities and dark moral mind-games. Sadly, writer Jon Spaihts and director Morten Tyldum (‘The Imitation Game’) opt for none of the above, preferring a creaky romantic drama that’s more dubious the more you think about it, followed by a spot of ropey late-in-the-day spaceship action.

There are a handful of really interesting scenes, including a night-time attack in James’s cabin and some breath-stopping zero gravity hijinks in the ship’s luxury swimming pool. But for the most part ‘Passengers’ is so anodyne, so frightened of the ethically troubling opportunities inherent in the setup that it just ends up feeling forgettable and silly. Made with half the budget by a filmmaking team wiling to take a few risks, this could have been sharp, sadistic and special. As it is, you’ll be longing for a nice nap yourself by the end.